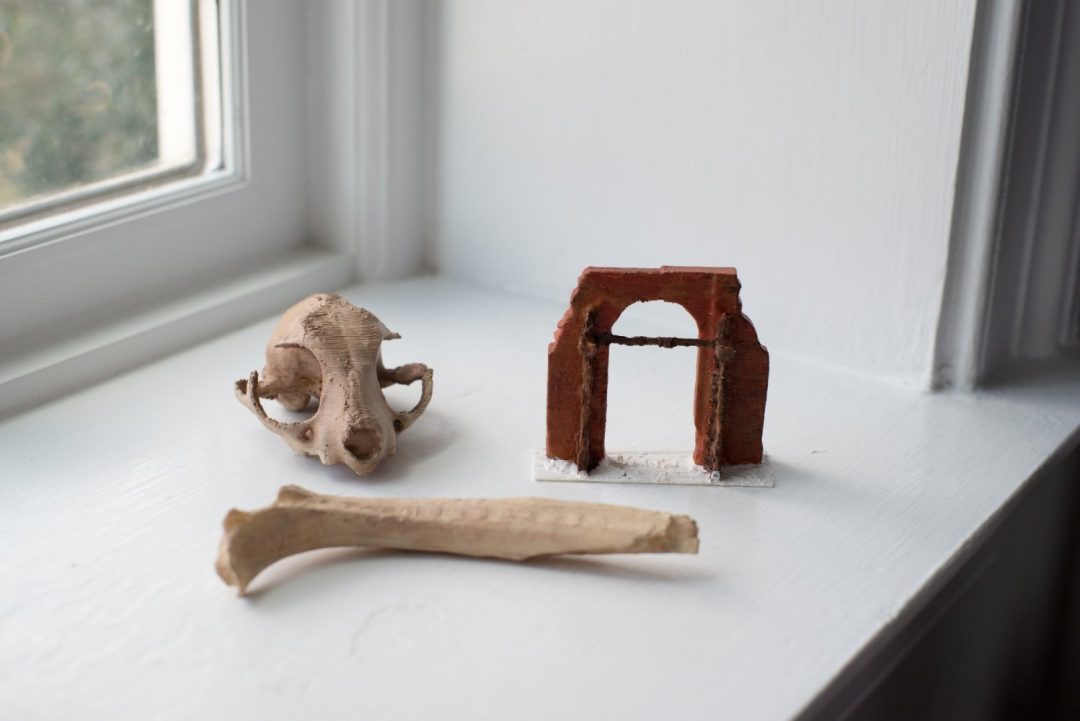 A set of gnarled dentures hang in mid-air. It rotates, exposing dents, ridges, and wear, either from use or years. “Those are actually human teeth,” says Peter Hedlund, the lead technologist at VFH’s Encyclopedia Virginia (EV). “It wasn’t uncommon at the time to have dentures made using teeth bought from slaves.” We’re looking at George Washington’s dentures, reproduced in virtual reality via a smart phone snapped into a Google Cardboard VR headset.

Next, Hedlund shows off what looks like a small, curved rod. “This is a pig’s rib bone. It was found in the sub floor of a slave dwelling in southern Virginia. It represents evidence of the diet of enslaved African Americans in the nineteenth century.” The rib, along with a cat’s skull and a miniscule archway belonging to Tredeger Iron Works, are virtual objects created from three-dimensional scans of the real thing.

These are the first virtual objects to be incorporated into EV as part of a $366,373 grant from the National Endowment for the Humanities. The grant award was announced in November 2016 and will support EV in its effort to tell the story of African American life in Virginia between 1619 and 1861. The grant funds the creation of new encyclopedia entries and virtual tours, collaborations with Virginia teachers, and the digitization of sixty virtual objects. The scans, produced by the Virtual Curation Lab at Virginia Commonwealth University, allow the encyclopedia’s visitors to view 3-D models of various artifacts in a web browser or in virtual reality. Readers can even download the scans and recreate the objects with a 3-D printer for some hands-on experience with history.

Launched by Virginia Foundation for the Humanities in 2008, Encyclopedia Virginia is an extensive online resource for Virginia history. The site offers users free access to more than 1,000 rigorously fact-checked entries on historical topics from the pre-colonial life of Virginia Indians, to the Civil War, through the Reconstruction era, and right up into the twentieth century.

Since the beginning, Encyclopedia Virginia has striven to stay on top of the latest in technology. “In 2008, when we launched, we already had digital mapping, things you would never find in a paper-bound set of encyclopedias,” Hedlund says. “You could take an entry on Robert E. Lee and plot the events of his life on the map to get a more complete perspective on his story.” Then, in 2012, EV began a collaboration with Google, using street-view technology to capture the interiors of historic structures throughout Virginia. It wasn’t long before the tours were made available in virtual reality, giving people an even more immersive experience with history.

“Being an encyclopedia carries with it some baggage,” Hedlund says. “People think it’s dry, so we always try to think of ways we can make the story we are trying to tell more engaging and interesting. Our work is more than just text. It’s audio, it’s video, it’s primary sources, it’s virtual tours. And now, thanks to this grant from the NEH, it’s virtual objects too.”

Educators have long been one of the encyclopedia’s primary audiences. “We’ve always tried to serve the educational community.” says Matthew Gibson, director of digital initiatives at VFH. “We’ve been working more formally with educators for the last several years. Several groups of educators have worked with us to think about what we can do with the site to make it more educator-friendly.” EV has brought together teachers and librarians from Hampton Roads, Northern Virginia, and Central Virginia, to think about the needs of students and to make the content more accessible. And this latest foray into 3-D objects is no exception.

“I think it’s important for students to have something they can touch that’s a part of the history they are studying,” Gibson continues. Any school with access to a 3-D printer will be able to download and recreate these artifacts of Virginia history. “The materiality, we hope, will create more of an immediate experience. If you can hold that artifact, feel the imperfections and wear on the object, I think it makes history less removed; the tangibility makes history more relevant.” Where most students experience history behind glass windows, and some not even that, this project aims to bring students closer to a past often discussed only in abstract terms.

The connection to reality is especially important in educating young students on some of history’s more complex subjects, including slavery.

“The sensitivity is an issue,” Gibson says. “Trying to explain to an elementary school student the concept of slavery, that people were bought and sold is a challenge. The idea includes a lot of violence, both mental and physical, and I think it is a challenge for educators to address that.” To navigate these difficulties, Encyclopedia Virginia staff will collaborate with teachers to develop lesson plans based around the 3-D artifacts and communicating the concept of slavery. “We have two teachers from elementary schools and one who is an advanced placement high school history teacher to help us think about those different audiences and what their expectations and needs are.”

Encyclopedia Virginia has always been eager to collaborate with other organizations to keep up with the latest trends in education and technology. “The entire project is an example of collaboration.” Hedlund says. “Collaboration with outside organizations like educators or VCU’s Virtual Curation Lab is what allows us to pull off a project like this.”

In addition to funding the collaborations with teachers and the digitization of sixty 3-D artifacts, the NEH grant also supports the creation of nearly 200 new encyclopedia entries, 200 more primary documents and 2-D images, the virtual documentation of ten to fifteen historical sites, and a series of six to eight podcasts. All of the new material will relate to slavery and the African American experience.

African American history is vital to the history of Virginia and the United States. “History is made up of these interweaving and often messy narratives,” Gibson says. “For instance, when the slave Anthony Burns was brought back to Virginia from Boston as a result of the fugitive slave laws, he spent several harrowing months in Lumpkin’s Jail—a building in Richmond where African Americans were held before being put up for auction. Intriguingly, the jail’s white owner and one of Virginia’s most notorious slave traders, Robert Lumpkin, was married to an African American woman. What we’re trying to do is expose connections between the past and present and how those narrative threads connect across different Virginia communities. Our aim is to provide a resource that people can get lost in.”

This project is one example of how Virginia Foundation for the Humanities is able to leverage the investment we receive from federal agencies like NEH to tell important, untold stories about Virginia’s history and culture. Thanks to their support and the support of individual donors like you, we are ensuring history is not forgotten, that it is preserved and presented in new, novel ways that engage people of all ages and backgrounds. Visit EncyclopediaVirginia.org to learn more about the encyclopedia and subscribe to their e-newsletter for updates about this project. 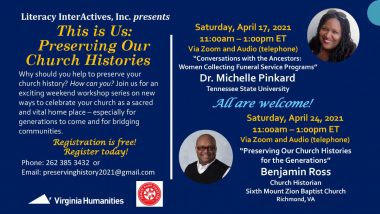 This Is Us: Preserving Our Church Histories

On April 17 and April 24, join Virginia Humanities grantee Literacy InterActives, Inc. for two webinars on the historic preservation of churches and church culture in Virginia. 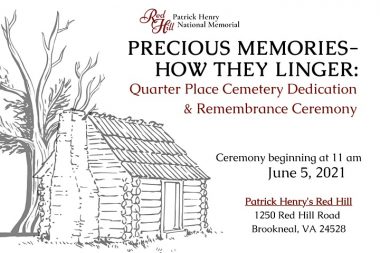 Join Patrick Henry’s Red Hill and members of the local African American community in a dedication of the Quarter Place Cemetery in remembrance of the enslaved population of Red Hill and their descendants.

This Is Us: Preserving Our Church Histories

On April 17 and April 24, join Virginia Humanities grantee Literacy InterActives, Inc. for two webinars on the historic preservation of churches and church culture in Virginia.