The Dry Rub of History 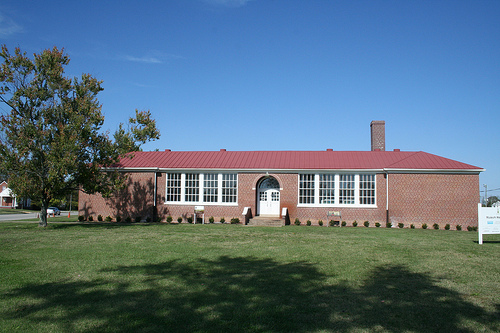 David Bearinger, director of grants and community programs at the Virginia Foundation for the Humanities (VFH), opened a panel discussion at the 2013 National Humanities Conference in Birmingham, Alabama, with a few words about his home state Virginia, “a place I love … a place where we marinate in history, though,” he added with a smile, “I have some friends who say it’s more like a dry rub.”

The rub is this: there are lots of strands of history, complicated layers that include conflicting voices and differing versions of our collective past. There are painful, hidden truths that have come to the fore in recent years: the abuses heaped upon the Native peoples during colonization; the slave trade that flourished in Virginia; the brutality of the Jim Crow era; the Racial Integrity laws of the 1920s that attempted to erase Virginia Indian ethnicity; the closing of publicly funded schools in Prince Edward County for five years rather than integrating them. This latter story is the focus of the Robert Russa Moton Museum in Farmville, Virginia, an institution that VFH has played a key role in funding and supporting.

Lacy Ward, director of the museum and a board member of VFH, took part in the panel, titled “Eyes Wide Open: Why the Humanities Matter (More Than Ever) When the Stories Aren’t Easy and the Truth Hurts,” and he spoke eloquently of how events in Birmingham rippled out to rural Farmville in 1963. One of the most fiercely segregated cities in the nation, Birmingham was at war with itself over integration in the early 1960s. During the National Humanities Conference, veterans of that era recalled gruesome details: white terrorists fire-bombing the homes of law-abiding black citizens; policemen under the direction of Bull Connor, Birmingham’s commissioner of public safety, unleashing attack dogs and high-pressure fire hoses upon children and teenagers marching in peaceful protest; members of the children’s crusade being spat upon and arrested while the nation watched, aghast, on television. And then the most chilling event: on the quiet Sunday morning of September 15, 1963, four African American girls attending church were killed by a bomb. Could this be America?

When news of that horrific event reached Farmville, there was an extra level of fear: integrated schools were set to open the very next day after four years of forced closure. Parents were terrified at the idea of putting their children in peril. The schools were being opened through private efforts, as the county still refused to fund integrated schools. (It would take another year before a Supreme Court ruling forced them to do so.) The courage evinced by the parents and students was remarkable.

Telling the story of the transition from segregation to integration—in all of its manifestations—is at the heart of the Moton Museum’s work. The museum’s mission is to show how everyone in the community was adversely affected: both black and white students were denied public schools; private tuition was out of reach for the majority, and a financial strain for others; local businesses suffered. And this went on for years.

In creating the museum, Ward understood that listening was key. He wanted all points of view, and that required conveying the same message to both the NAACP (the National Association for the Advancement of Colored People) and the local Rotary Club. In fact, it was at the Rotary Club where Ward had a revelation about the myriad ways in which the community was affected. A white insurance executive spoke of the emotional impact the school closings had on him. As a young athlete, he always envied his older brother’s high school letterman’s jacket, but never received one of his own because the school was closed during his senior year. That loss still rankled him after all these years.

According to Ward, most people in the county were so ashamed at what happened that they refused to speak about it for decades. Now there is a place where that once-buried history can be openly discussed. Ward spoke with pride about how local people are bringing their grandchildren to the museum and becoming tour guides of their own pasts. As Ward said, they want “to make sure that their history doesn’t die.”

Written by Donna M. Lucey, media editor of Encyclopedia Virginia. Lucey has written a number of books of history and biography, including Archie and Amélie: Love and Madness in the Gilded Age.