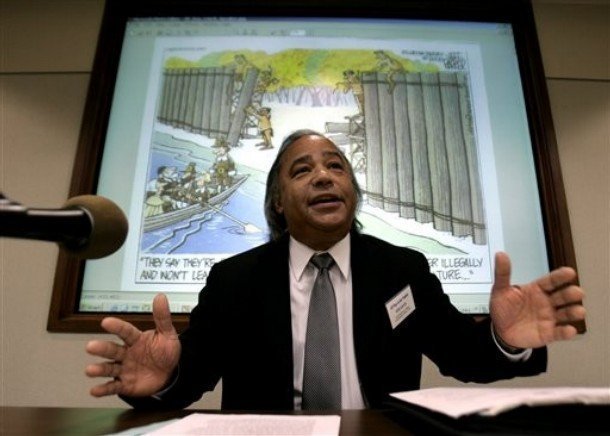 Stephen Adkins, VFH Board Member and Chief of the Chickahominy Indian Tribe, presenting at NMAI on the differing experiences of European-Native contact. Photo by Katherine Fogden, National Museum of the American Indian.

VFH Board member Stephen Adkins has been Chief of the Chickahominy Tribe for twelve years.

He also served on the school board for Charles City County where he became aware of a void in the way the story of Virginia Indians was told in Virginia history classrooms.

Adkins sat down in our radio studio with Elliot Majerczyk to share a little of his story and talk about the dynamic tapestry of Virginia.

The Foundation really has a pulse on the citizens of Virginia.

The Virginia Foundation for the Humanities looks at Virginia from Appalachia to the Eastern Shore, from Fairfax to Halifax.

When new ethnicities come to Virginia, they’re part of the population and there’s an overt effort by the Foundation to make them part of that evolving, moving life story of Virginia.

Stephen Adkins was elected Chief of the Chickahominy Tribe in 2001. He first got to know VFH through our Grants Program and is now a member of our Board of Directors.