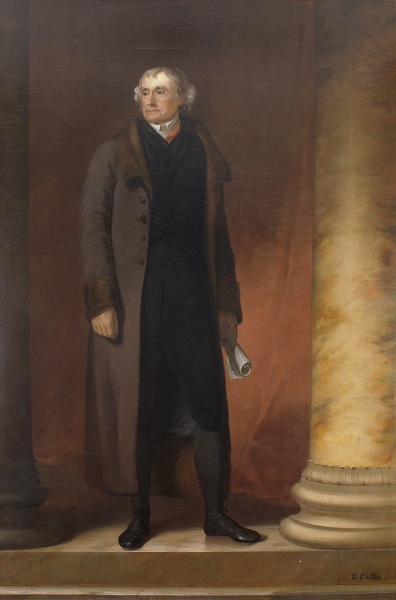 Thomas Jefferson portrait by George Catlin, after a painting by Thomas Sully. Courtesy Library of Virginia.

Brendan Wolfe is the managing editor of Encyclopedia Virginia, an online project of the Virginia Foundation for the Humanities. We caught up with him on April 13, Thomas Jefferson’s birthday, an occasion the encyclopedia marked by publishing—finally!—its entry on Jefferson.

VFH: So what took you so long?

WOLFE: What do you mean?

VFH: The encyclopedia has been online for almost eight years. Wouldn’t you want to start with Jefferson? Or did it just take eight years to write? It does look awfully long.

WOLFE: It’s actually our longest entry, but no, it didn’t take eight years to write. We create our content in sections. So we’ve done sections on twentieth-century history, the Civil War, Reconstruction, Virginia Indians. You get the idea. A few years ago we got funding to do a whole section on Jefferson.

VFH: What do you mean a whole section?

WOLFE: We’ve got an excellent entry on Sally Hemings with dozens of primary documents linked right there. Plus Monticello, Poplar Forest, Notes on the State of Virginia.

VFH: In a section all about Thomas Jefferson, why didn’t you start with the entry on him?

WOLFE: It sort of goes back to the reason we do content in sections in the first place. We try to make the entries so that they are coherent as a group, so that they make sense together. The idea is that when you read the entry about Jefferson and the law, let’s say, you’re not getting a different Jefferson from the one you read about in the Virginia Statute for Religious Freedom or the one in Jefferson and religion. The idea is that the entry on Jefferson himself will summarize all the content we’ve published so far. We’ve done this with other sections, summary entries on the Civil War in Virginia, say, or colonial Virginia. It’s just that this summary entry is on just one person.

VFH: So if you’re summarizing all your Jefferson content, does that mean you’re done?

WOLFE: Actually, no. We’ll be publishing an entry on the Louisiana Purchase soon, and one on Jefferson’s presidency. And Jefferson and slavery, and an entry on the enslaved people who lived at Monticello.

VFH: Hasn’t enough been written on Jefferson already? Why on earth does the world need one more thing on Mr. Jefferson?

WOLFE: You’re right. Maybe it doesn’t. But Encyclopedia Virginia is not just one entry on Thomas Jefferson, or even a bunch of entries on Jefferson-related topics. It’s an entire history of the commonwealth, with all of these entries linked together. So you can click on Jefferson and that will take you to an entry on colonial Virginia, and from there you can click on Indians in Virginia, and that connects to entries on everything from Indian cooking to the Racial Integrity Acts of the 1920s and Loving v. Virginia.

VFH: So Loving v. Virginia is just two clicks away from Jefferson?

WOLFE: Exactly! When you read a standard history of Thomas Jefferson you don’t get him in the broader context of Virginia history. You can’t follow your nose and end up in Caroline County with Richard and Mildred Loving. But those connections are there, they’re real, they make sense, and that’s what’s so cool about the encyclopedia. It tells the whole story of Virginia and makes it immediately accessible.

VFH: Not the whole story, though, right? Where’s your entry on James Madison?

WOLFE: Good point. I gotta get back to work. 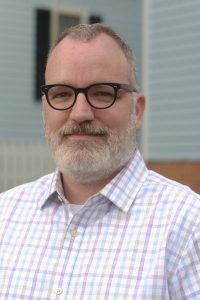 Brendan Wolfe is managing editor of Encyclopedia Virginia. He came to VFH after earning an MFA in nonfiction writing at the University of Iowa and working in journalism and educational publishing. He has published widely, including personal essays and reviews, and is at work on a book about the early jazz legend Bix Beiderbecke. For the encyclopedia, Wolfe has written a number of entries, including on Jamestown, the Middle Passage, Indians in Virginia, and Buck v. Bell.