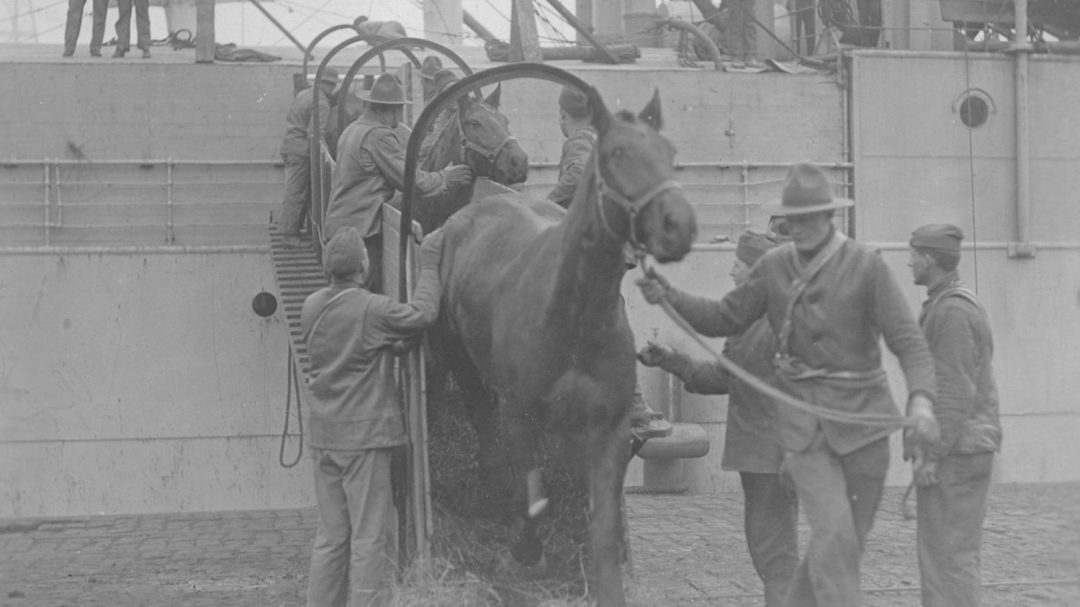 A cargo of horses leaves a transport ship at St. Nazaire. Nearly 50,000 American horses left from Newport News. - Courtesy of the Quartermaster Museum

While researching and cataloging the many World War I memorials throughout Virginia, Virginia Humanities fellow Lynn Rainville became fascinated with the extensive, and little explored, role that Virginia played in the Great War.

Despite the significance of its war effort, Virginia’s part of the war is rarely addressed today.

Rainville sat down with Chance Lee, a U.Va. student intern at Virginia Humanities , to talk about her project and why such an important piece of history has been forgotten.

Q: What are you working on during your fellowship at Virginia Humanities ?

The project that I’m working on now is a book on Virginia’s role in the Great War that will be released in 2017 with the University of Tennessee Press, in time for the centennial of the war’s end in 2018.

Q: What made you want to write about the Great War?

A year ago, I teamed up with a colleague of mine, Eric Yellin (Associate Professor of History at University of Richmond) and received a grant from Virginia Humanities to locate, research, and disseminate the locations of WWI memorials in Virginia. Part of this project was locating these memorials and seeing how Virginians remembered their dead from the Great War. I was going to stop there.

I wrote a couple articles about the memorialization of WWI, and was ready to call it a day. But, every time I found one of these memorials, there would be all these names of the men who didn’t return and these very poignant remembrances from the community. Most of the press about the war was focused on the Brits, the French, and the Russians who lost millions of men. In Virginia, 100,000 men were drafted and 3,700 died. At the same time, the allies were sometimes losing this same number of men in just an hour during certain battles.

However, when you looked at it from the perspective of these small, often poor, communities in Virginia and saw the lengths they went to erect these memorials, you begin to learn the significance of their sacrifice. I realized there was a story about Virginia’s role in the Great War that had not been told. At first, I was just going to write an article about Virginia’s role in the war, and then I kept uncovering new and interesting material that wasn’t going to fit in an article .

Q: And, what exactly was Virginia’s Role in WWI?

One of the ways that Virginia contributed, more so than many other states, was training horses. We bred, trained, and shipped hundreds of thousands of horses at remount stations throughout the state. Then we had Hampton Roads, one of the deepest harbors on the Atlantic. Newport News became one of two points of embarkation during the war, the other one being in New York City. Hundreds of thousands of men and horses were shipped abroad from Hampton Roads. Virginia also had an elaborate railroad network that was used to send supplies and raw material to the coastal ports. We had over a dozen training camps, one of the largest concentrations of any state. With such a large number of resources and facilities, Virginia was vital to the war effort.

Q: Most people remember World War II as being a battle against Fascism and the Nazi party while the understanding of World War I is much less clear. What were Virginians’ attitudes towards the war at the time?

At the time, there would have only been a limited understanding of what was happening abroad and what they were fighting for. And this worked to the advantage of the federal government when it instituted the draft. Much of what we know today about WWI would have been censored at the time. For example, there would have been a limited understanding of how Allied soldiers were being treated as cannon fodder. Here in the United States, there wasn’t one clear cause to fight for, especially given the large number of German Americans, instead, men were told it was their patriotic duty to fight.

Q: Then, how were people convinced to fight?

To rouse public opinion President Wilson created a Committee on Public Information (CPI) which used a lot of Orwellian tactics. It was basically an ad campaign to make sure people supported the war. Back then, it wasn’t a given that most Americans were anti-German, nor were most necessarily pro-British. That’s a World War II conception. These were global machinations well beyond the average Virginian family’s day to day experience, and one of the ways the CPI appealed to the sons’ and husbands’ sense of duty was propaganda featuring slogans like: “They are Proud of You; Be Proud of Yourself” (accompanied by a drawing of a soldier with his mother and wife) or a civilian in a suit with his daughter sitting on his lap asking “Daddy, what did you do in the Great War?” These posters played on men’s conceptions of their masculinity and sense of duty.

Q: Was there any resistance to the war effort in Virginia?

Yes, but you see this in subtle ways. For example, one of the few ways to avoid the draft was to have a medical exemption. On the registration form, one of the questions was: “Are you claiming a medical exemption?” Most people said no, but some of the people who said yes listed things like bunions. In other cases, sailors tried to desert and disguise themselves in their new identities. Women were recruited for the navy, as Yeoman (F), to collect and analyze fingerprints to bring these deserters to justice. So, at a grassroots level, there was resistance, but the effectiveness of the Committee on Public Information cannot be underestimated.

Q: Why do you think a lot of this history has been forgotten?

The most important thing to realize is that in the first decade after the war, it wasn’t forgotten. People did care. In 1919, one of the first post-war celebrations occurred on the Fourth of July. Around the country that year the Independence Day celebrations honored veterans. Communities hosted parades for the veterans and treated them  to banquets. However, other things were happening in Virginia that moved their service and sacrifices out of the news.

Q: What was happening?

Thousands of men were returning home at the same time, and they all needed jobs. In many cases the jobs were occupied by women who filled in during the mens’ absence. And, in other cases, older men (above the draft age of 45) had taken over these positions. Additionally, a certain number of men who returned were injured, maimed, or had “shell shock” (today we’d call it PTSD). Employers just weren’t ready for this.

Then, of course, you have the Great Depression ten years later. Finally, World War II shifts the public focus on veterans from The Great War to the “Greatest Generation.”

Q: Do you think that perceptions of WWI are starting to change?

I’m biased. From where I sit, it’s on people’s agenda. Local historical societies know of people who served and want to commemorate the upcoming anniversaries. Unless you live around D.C. where they’re making plans to build a national memorial to WWI on the site of the General John J. Pershing memorial, or if you live in in Kansas City, Missouri where the National World War I Museum is located, there isn’t much exposure to this military era. I am optimistic that next year, the centennial of America’s entry into the war, The Great War will be on people’s radar and that this awareness will continue to grow as we approach 2018, the centennial of the war’s end. However, I really think it will take a Hollywood blockbuster movie to put the war in the spotlight.

Q: Finally, what has your time at Virginia Humanities enabled you to do that you wouldn’t have otherwise?

The Virginia Humanities Fellowship has offered me a rare opportunity to focus on one project exclusively. Compared to the everyday life of an academic, with meetings and students clamoring for your attention, the fellowship provides a welcoming haven from distractions. Having an office dedicated to only one purpose enhances that laser-like focus. Daily access to UVA resources is an invaluable resource in itself. The library delivers requested books to a magical cupboard in our building. Running downstairs to see what the LEO librarian has brought for me is a pleasurable daily task!

Lynn Rainville earned her Ph.D. in Anthropology from the University of Michigan in 2001. Since then, she has studied ancient households, historic cemeteries, enslaved communities, segregated schools, and the lives of exceptional, yet overlooked, Americans.

This work has been supported by numerous grants and she has written three books, (on Assyrian houses, African American cemeteries, and Sweet Briar College) with another three due out by 2018 (on World War I, Enslaved Families at Sweet Briar, and on research methods for studying slavery).

She directs the Tusculum Institute for Public History at Sweet Briar College and is currently a fellow at the Virginia Foundation for the Humanities. 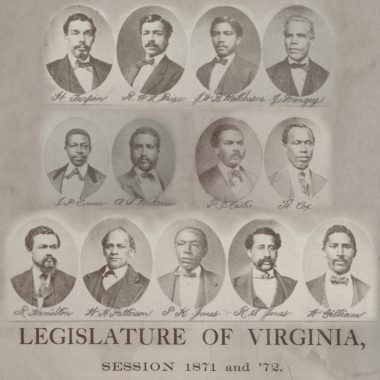 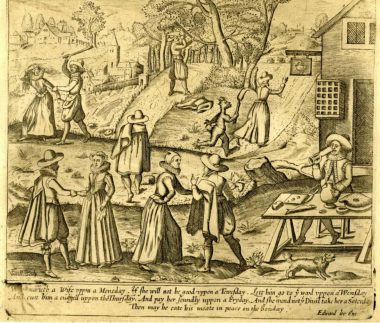 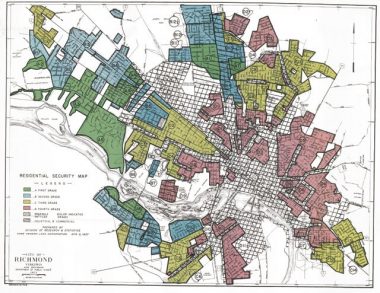