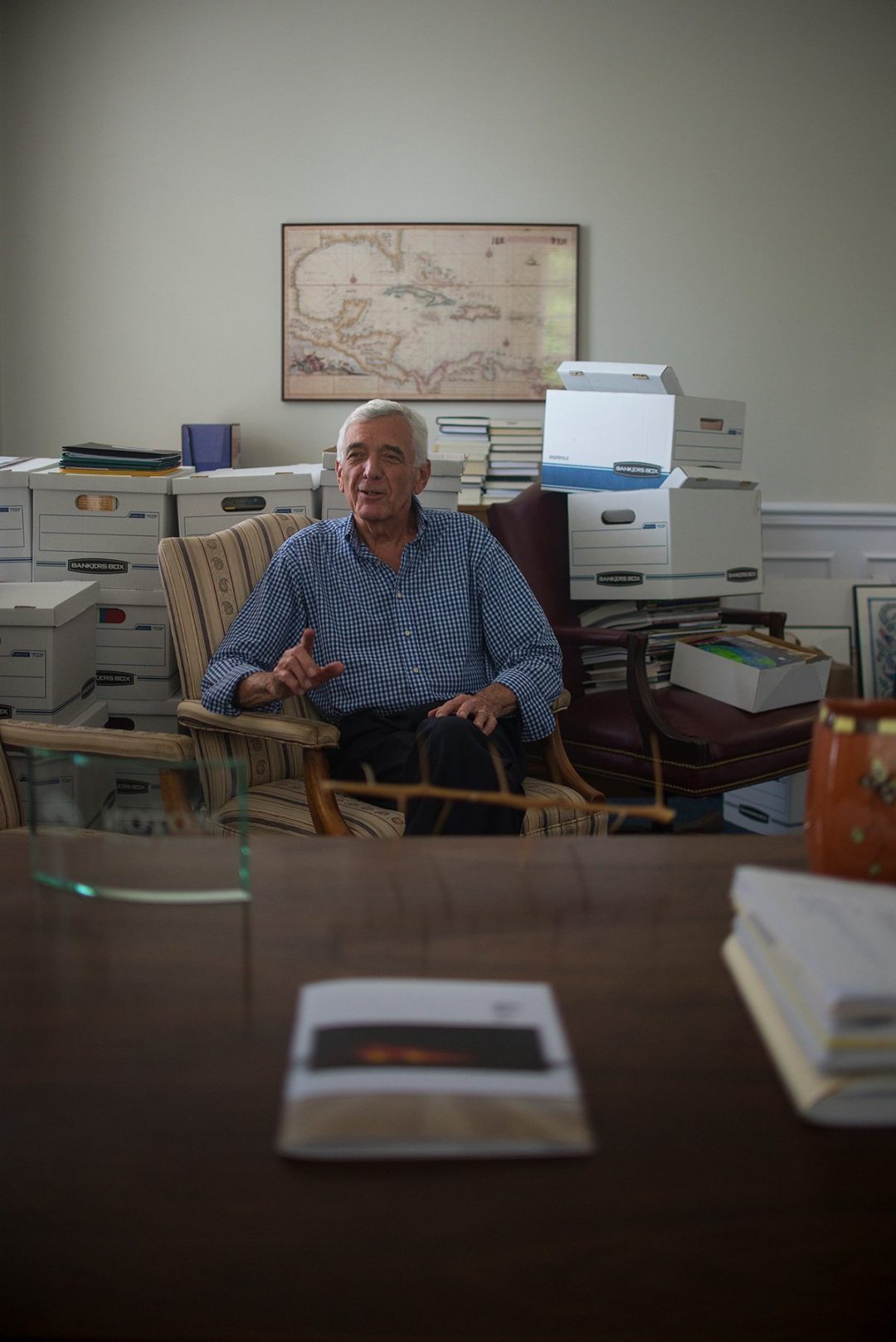 Rob Vaughan works in his office at VFH as he prepares for retirement. Photo by Pat Jarrett.

Sitting in a sea of half-filled boxes as he packed up his office, Robert C. Vaughan III, the founder and retiring president of Virginia Foundation for the Humanities, was contemplative. Having already received a number of tributes—including from the floor of the Senate of Virginia and the House of Delegates—it would have been easy for Rob to just sit back and crow about his remarkable success. After all, from humble beginnings the organization blossomed under his tutelage to become the largest—at least three times the size of comparable institutions in bigger, more populous states—of the fifty-six state humanities councils located throughout the United States and its territories. Rob, as he is known to just about everyone, remains a star among his peers; thus, the head of the National Endowment for the Humanities traveled from Washington, D.C., to praise Rob at his retirement party.

The story of how a newly minted English PhD from the University of Virginia with little or no administrative experience started VFH is inspiring—and one that reveals a lot about his character. Out of the blue, Edgar F. Shannon Jr., then president of the University of Virginia, called him one day in 1974. Shannon was seeking someone to start a humanities council, and the chair of the English department had recommended Rob. Would he be willing to discuss the possibility? Though Rob’s ambition was to teach, he was intrigued. Curiosity, an unquenchable interest in people and ideas, and a big dose of courage led Rob to take on the challenge, while simultaneously teaching. (He managed to pull off this dual role for nearly thirty years, teaching variously in the university’s English department and at the Darden School of Business.)

Beginning as a two-person organization—Rob and an assistant in one room—VFH was then devoted entirely to dispensing grants. But Rob envisioned a broader mission, and over time the organization grew. Asked if he had a blueprint in mind or another entity as a model, Rob said, “Not at all.” He gave credit entirely to the people around him—board members who were always open to innovation and members of the staff, whom Rob pronounced as nothing short of “genius.” “Lots of people have come to work here and done things that I didn’t imagine,” he said. “They did, and took off with it.” During our conversation, the only credit Rob would accept was acuity in hiring just the right sort of people—those “who had ideas.” Andrew Wyndham, who joined VFH in its infancy and eventually became the director of media programs, has since retired. He described Rob’s management style: “He respected the passions and abilities of staff and treated us as collaborators. He encouraged us to invent or adopt projects.” Rob saw his role as one of encouraging creative undertakings and giving his staff autonomy. “Opportunity for staff members is the key to the way I operate,” Rob insisted. Once programs got rolling, he backed off from micromanaging them, reasoning that “they’ll be better if I don’t stay in the way.”

Having trust in people is at the core of Rob’s personality. He sees the best in everyone, even if they disagree with him. When asked how he managed, year after year, to navigate the tricky waters of the General Assembly, he claimed it was “fun” because the senators and delegates would “light up” when he approached them. (On further questioning he admitted not everybody would brighten, but many of them did.) “Lots of them get” VFH’s mission, he said, “and they’ve become benefactors and champions.”

Throughout his career, Rob was devoted to social and racial justice. It’s in his DNA. “I grew up in a family that didn’t seem to have racism as a basis for being in the South,” he said. His grandfather, the only dentist in Farmville, Virginia, took both whites and blacks as patients. “It didn’t matter to him what color they were,” he said. That probably didn’t sit very well with local segregationists, and when Farmville closed its schools for five years rather than integrate, both his grandparents openly opposed that policy of Massive Resistance, which defied the U.S. Supreme Court’s mandate to desegregate public schools. As a result, they were vilified and lost their best friends, the local newspaper editors.

Rob’s father also fought racism. After being appointed the minister of Petersburg’s historic Second Presbyterian Church—an all-white congregation in a rigidly segregated city—he did something that seemed unthinkable: he opened the church to African Americans. State Senator Jack Temple, a fierce advocate of Massive Resistance, was a member of the congregation and discussed matters of race with Rob’s father; there seemed to be no common ground. Yet when the first black couple entered the church, Temple walked back to greet them, and brought them up to his own
pew. That event “transformed” Temple’s life, according to Rob. Once a staunch segregationist, he reversed course.

That remarkable transformation may explain Rob’s commitment to—and optimism about—the power of dialogue, education, and civic engagement to raise understanding among all Virginians. From its inception, he wanted VFH to be, as he put it, an “open-minded and genuinely creative organization.” And it has paid off with a range and depth of programs—always evolving with the times—that are unsurpassed by any other humanities council. VFH boasts radio shows heard around the world, a digital encyclopedia using cutting-edge technology, a nationally renowned book festival, on-the-ground, innovative programming in the African American and Virginia Indian communities, folklife events organized in every nook and cranny of the state, an annual high-tech conference for web professionals, and a center offering lessons in the craft of making hand-printed books and fine art prints. Harkening to its original mission, VFH still dispenses grants for worthy projects, and it supports scholars in a fellowship program.

Rob thrived on all this variety, making every day different. “I would have gone nuts” doing the same things for decades, he said. But how did he make it look so easy? He hesitated before replying, “I don’t know if it’s been easy, but it’s been fun. I’ve just had a wonderful time, quite frankly.”