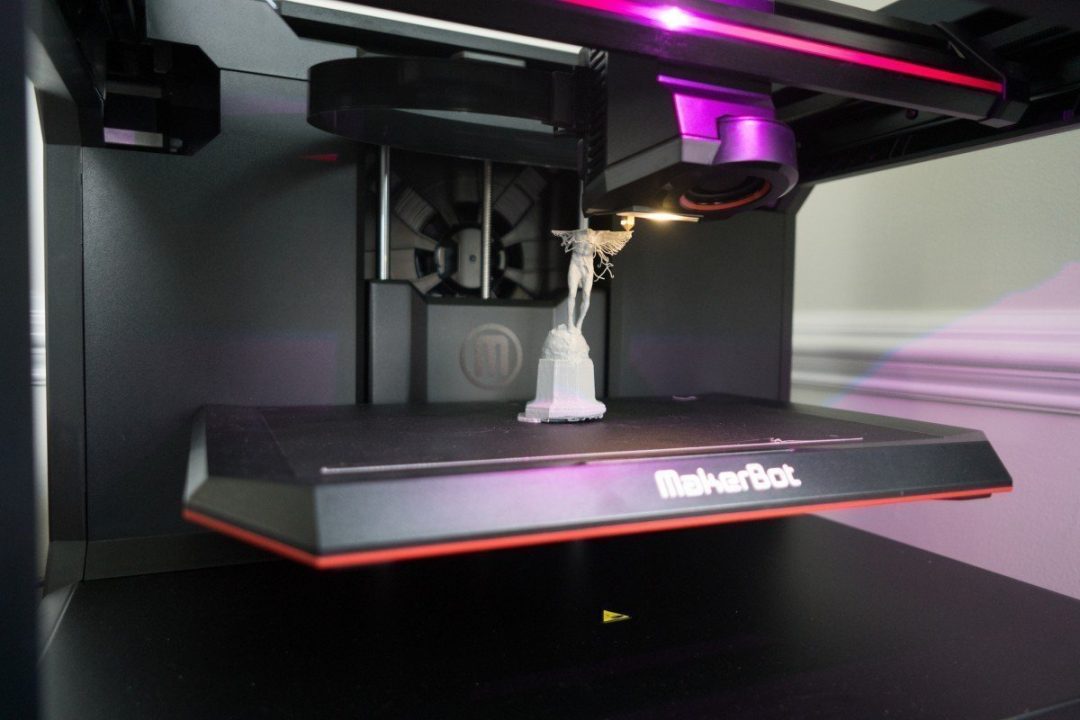 A 3-D printer in Peter Hedlund's office at Encyclopedia Virginia produces a miniature version of Gutzon Borglum’s “The Aviator” from a digital file. Photo by Peter Hedlund

Encyclopedia Virginia published its first entry ten years ago. “Has it been that long?” editor Brendan Wolfe said, feigning ignorance. “Actually, we’ve been looking forward to this. It’s a good time to think about where we’ve been and where we’re going.”

Wolfe and the encyclopedia’s director, Peter Hedlund, have been with the project since the beginning and have seen it grow steadily in both its content and ambitions.

“That first entry must have been about literature or twentieth-century history,” Wolfe said. “We began with those sections, sort of figuring it out as we went. Thanks to some grants from the National Endowment for the Humanities and support from the state of Virginia we went on to produce content on colonial Virginia, Virginia Indians, and the Civil War. That’s when we started cooking with gas.”

The free, online, authoritative resource has published about 1,200 entries now and the staff, which also includes media editor Donna Lucey and assistant editor Miranda Bennett, is in the second year of a three-year grant from the National Endowment for the Humanities to create content related to slavery in Virginia.

“This grant has allowed us to do some new things,” Hedlund said. “We publish lots and lots of primary resources now, a decision that came from our close work with teachers. We’ve produced two seasons of a podcast called Not Even Past. And in addition to images and audio and video clips, we’re now publishing three-dimensional objects in Encyclopedia Virginia. You can examine objects like George Washington’s dentures online and even download and print them with a 3-D printer.”

Several years ago Hedlund received training from Google and, using the company’s StreetView technology, began creating 360-degree virtual tours of historic sites in Virginia. “Thomas Jefferson’s Poplar Forest was the first place we went,” Hedlund said, “but lately we’ve branched out to lesser-known spaces. For instance, we’ve been documenting slave dwellings, so people can visit them even if they’re not accessible to the public. But it’s also a form of preservation. These structures are often falling down and won’t last much longer.”

Looking ahead, Hedlund focuses on the project’s work with educators. “Working with teachers has been key for us,” he said. “It allows us to constantly focus on making Encyclopedia Virginia as useful as possible for them. We’re thinking about the new ways in which Virginia tests its students. We’re thinking about reworking some entries to different reading levels and even creating audio versions of some entries.”

It’s the work of another ten years.