Stories of the Peaks 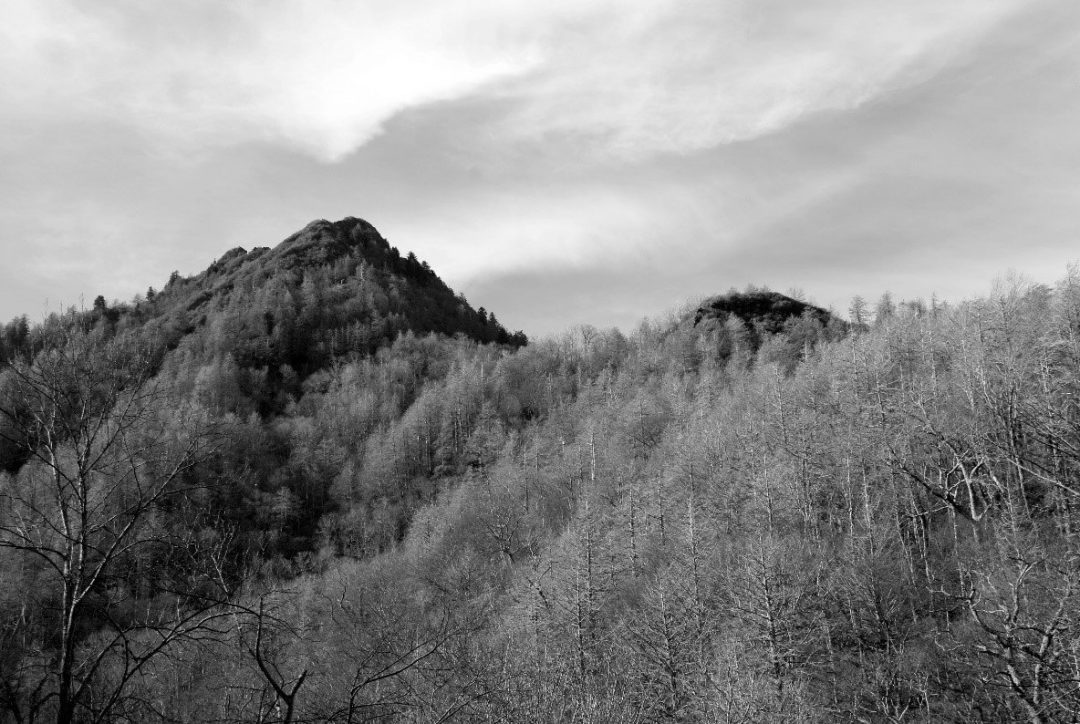 "The Chimneys" as seen from the Appalachian Trail. Photo copyright Susan Bratton, 2018.

Susan Bratton is Professor of Environmental Studies and a Fellow of the Institute for Studies of Religion at Baylor University in Waco, Texas. This fall, Bratton is a Virginia Humanities Resident Fellow studying Native and early colonial religious beliefs about the Appalachian Trail and the surrounding landscape. On November 6, at the beginning of National Native American Heritage Month, Bratton gave a public talk on “Foundations of the Appalachian Trail as Sacred Landscape: Colonial Demons and Holy Mountains.” She recently sat down with Rachel Teubner, communications intern, to discuss her work.

Despite the fact that we know quite a bit about Native American communities, the Trail has often been interpreted as an unpopulated, primeval place. That idea is largely a cultural product of nineteenth century romantic ideas about nature. And similarly, popular views of Native American beliefs tend to be shaped by nineteenth century reports that were circulated through tourist guides, adhering to European stereotypes.

Those stereotypes are part of a broader tendency for new, dominant peoples to displace and erase Native myths, in the same way that physical displacement occurs. So I wanted to expose people, and especially hikers—many of whom come to the Trail with their own religious or spiritual goals—to some of the richness of these religious traditions and stories.

You study various Eastern Woodland tribes, but so far you’ve been looking particularly at Cherokee narratives and traditions. Why the Cherokee?

There’s a geographic reason: many hikers begin the trail in Georgia, right in the middle of Cherokee territory. Cherokee stories are also particularly well preserved through oral tradition. We have generations of materials from living communities, along with reliable records from the nineteenth century that offer a specifically Cherokee perspective on the peaks. It’s a great place to capture some of these rich precolonial narratives.

What sorts of narratives?

Cherokee religious life is based around valley townhouses: large structures for worship and other ceremonial gatherings. The townhouses are mirrored in the Cherokee belief in parallel animal societies: bears, panthers, and rabbits each have their own townhouses, each in their own villages within the mountain. Clingmansdome, which the Cherokee call Kuwo-i, or “Mulberry Place,” the highest point on the Trail, is the townhouse of the chief of the bears, the Great White Bear; that’s where bears hold their dances during the winter. So animal townhouses and villages are the theater for all kinds of Cherokee narratives.

There are lots of monster-slayer stories, too. In one, a Shawnee named Groundhog’s Mother—a medicine man—pursues a large monster named Uktena who has a large crystal in the middle of its forehead. The story reads like a long trip on the Appalachian Trail: Groundhog’s Mother chases Uktena from Georgia to the Chimney (called “Duniskwalgunyi,” or “Place of the Deer’s Antlers”) below Clingmansdome, up the high ridge from Georgia as far north as Big Bald on the North Carolina/Tennessee border. Cherokees use crystals for divining, so eventually Groundhog’s Mother kills Uktena and takes the crystal.

The Uktena story demonstrates a sweeping geographic perspective, and European settlers didn’t have anything like this sort of geography until much later. That sort of knowledge is pretty important to getting around the Trail.

What do these stories have to offer today’s hikers?

Many of the stories are precautionary; that’s not the only way to interpret them, but they certainly illustrate the importance of understanding the trail environments and the need to be cautious as a form of self-preservation.

And Cherokee stories teach communitarian social values. The Cherokee have a tradition of noble, peak-dwelling immortals, of exceptional character, called the Nunne’hi. They rescue lost Cherokee, intervene in battles, assist warriors who get into trouble, and even accommodate Cherokee fleeing white settlement. These stories offer great models for how communities should respond under stress. The stories of the animal townhouses, too, demonstrate a more respectful, more equivalent way of looking at animals, acknowledging that animal societies have interests of their own.

These stories offer hikers a sense of the deep, rich heritage of the Trail. It’s not just one big Native American story; there are different language groups, like the Lenape (Delaware) and Abenaki, with different stories and different perspectives. Multiple tribes had traditions concerning Mount Washington, the highest peak in New England: The Pennacocks identified it as the Place of the Great Spirit, too sacred to ascend. The Abenaki believed a powerful and dangerous spirit dwelled on the summit. The peak was also the place where a Native American family landed following a great flood.

How has your time at Virginia Humanities been so far?

I’ve been able to visit several mid-Atlantic sites, which means I can gather new images and gain new insights, both into the Native communities I’m looking at and into the Christian groups that arrived later, like the Puritans, producing their own accounts of nature and of encounters with Native communities. I’m planning to connect with other authors working on related projects. And last month I had the chance to attend a UVA symposium on indigenous food sovereignty and join Virginia Humanities’ Food and Community project in helping to prepare indigenous meals for the 200 symposium attendees! It’s very enriching being here.

Susan Bratton is the author of five books on religion and environmental ethics including The Spirit of the Appalachian Trail (University of Tennessee Press, 2012). She has also published more than forty book chapters, and more than 100 articles, on topics ranging from Rachel Carson and ocean ethics, to the spirituality of outdoor experience, to fire management in parks, the impact of wild hogs, and restoration of disturbed high mountain floras. Bratton has served as a scientist with the United States National Park Service, and established a field laboratory in Great Smoky Mountains National Park. Her current research continues to focus on conservation ecology and environmental ethics.