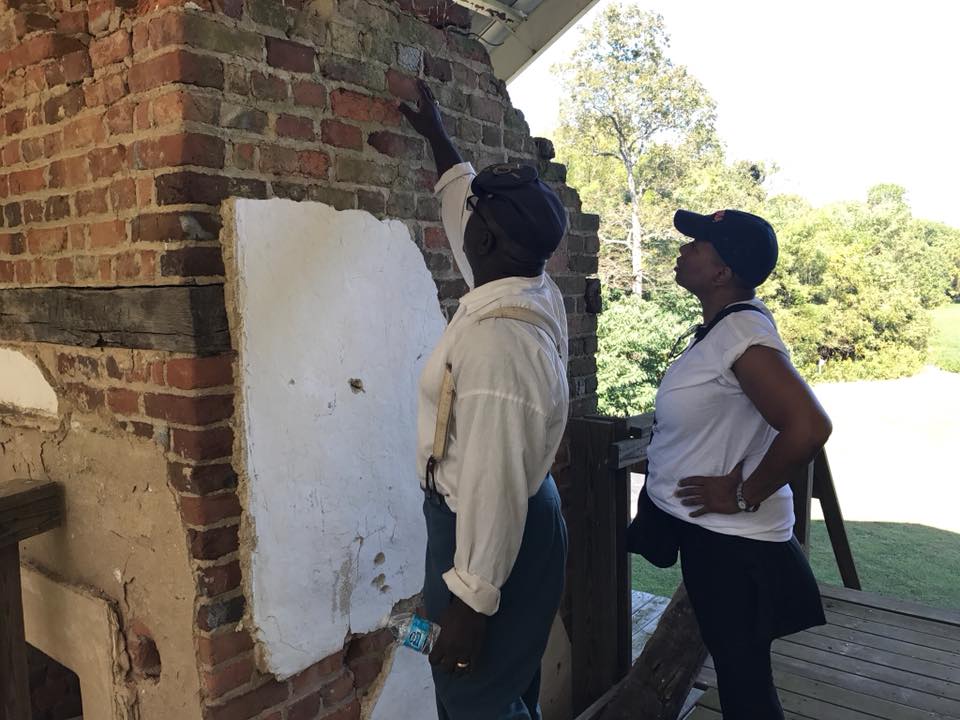 Joseph McGill and Dr. Lauranett Lee on the top floor of Menokin, identifying fingerprints in the bricks. The Menokin Foundation was recently awarded a grant from Virginia Humanities for research focusing on the lives of individuals who were enslaved at Menokin Plantation in Virginia's Northern Neck. Image courtesy Menokin Foundation

Virginia Humanities announces $79,700 in recent grants to fifteen nonprofit organizations in support of public humanities programs for audiences throughout the Commonwealth and beyond.

The Virginia Humanities Grant Program responds directly to the interests and concerns of local communities across Virginia. Since 1974, Virginia Humanities has awarded more than 4,000 grants, creating opportunities for Virginians to share their stories, explore what makes us each unique, and connect through what we have in common.

“From Pulaski County in Southwest Virginia to Warsaw in the Northern Neck, these grants reach across the Commonwealth to support organizations that are doing important work,” said Matthew Gibson, Virginia Humanities executive director. “Fostering a shared understanding of Virginia’s history and culture is central to our mission, and the projects included in this grant cycle will do just that.” Virginia Humanities grant projects reach an estimated annual audience of 1.5 million, with an average 4:1 dollar match.

As a result of Virginia Humanities grant funding, educational and cultural organizations across the state have harnessed the power of the humanities to address important contemporary issues and enrich the lives of all Virginians.

The following organizations received grants from Virginia Humanities between July 1, 2018 and January 31, 2019:

American Civil War Museum (Richmond): $9,000
An exhibit and related public programs exploring the roles that Jefferson Davis, his family, and the Confederate Museum (later the Museum of the Confederacy) played in developing the “Lost Cause” narrative after the Civil War.

Catticus Corporation (Farmville project focus): $9,000
Research and early-stage script development for a documentary film on the response of white Southerners, particularly in Virginia, to the Supreme Court’s 1954 desegregation mandate.

Danville Museum of Fine Arts and History (Danville): $3,000
Planning for an exhibit and series of related programs on the life and achievements of Camilla Williams, a Danville native who was the first African American soprano to appear with a major American opera company and who went on to gain international recognition as a singer and civil rights pioneer.

Gallery 5 (Richmond): $3,000
A series of facilitated public conversations, presented monthly, exploring a range of social issues that are central to Richmond’s past and present.

George Mason University (Fairfax): $9,000
Development of a website that tells the story of the “lost segment” of the Appalachian Trail through Southern Virginia and the social and economic impact that the re-routing of the Trail had on Virginia communities.

Longwood University (Farmville): $2,200
Publication and distribution of original writings by American military veterans and their families, exploring the effects of combat and the experience of military service generally.

Menokin Foundation (Warsaw): $5,000
Research focusing on the lives of individuals who were enslaved at Menokin Plantation in Richmond County.

New York Women in Film and Television (Alexandria project focus): $7,500
A half-hour documentary film exploring the history and stories of African American life in Alexandria as seen through the eyes and creative work of two local artists who build miniature dioramas depicting scenes from daily life in city neighborhoods.

Northampton Historic Preservation Society (Eastville): $3,000
Production of a documentary video on the social history of the 1914 Jail in Northampton County on Virginia’s Eastern Shore, followed by a public “premiere” screening/discussion of the finished film.

Prince William Public Library System (Prince William): $1,000
Publication of a study/discussion guide (print and on-line versions) to be used in conjunction with public screenings of the documentary film “An Outrage” which explores the history and legacies of lynching in the American South.

YMCA of Pulaski County (Pulaski): $10,000
A research and oral history project focusing on the history of the Calfee Training School in Pulaski County, one of many such schools that provided education for African American children during segregation, and the site of a landmark legal challenge under the doctrine of “separate but equal”.

The Open Grant Program welcomes proposals on a wide range of subjects, for projects in any format, with awards up to $10,000. Deadlines are April 15th and October 15th. Draft proposals are strongly encouraged. The Discretionary Grant Program provides smaller grants of up to $3,000. There is no deadline for this program, but applicants should contact Virginia Humanities staff in advance before submitting a proposal.