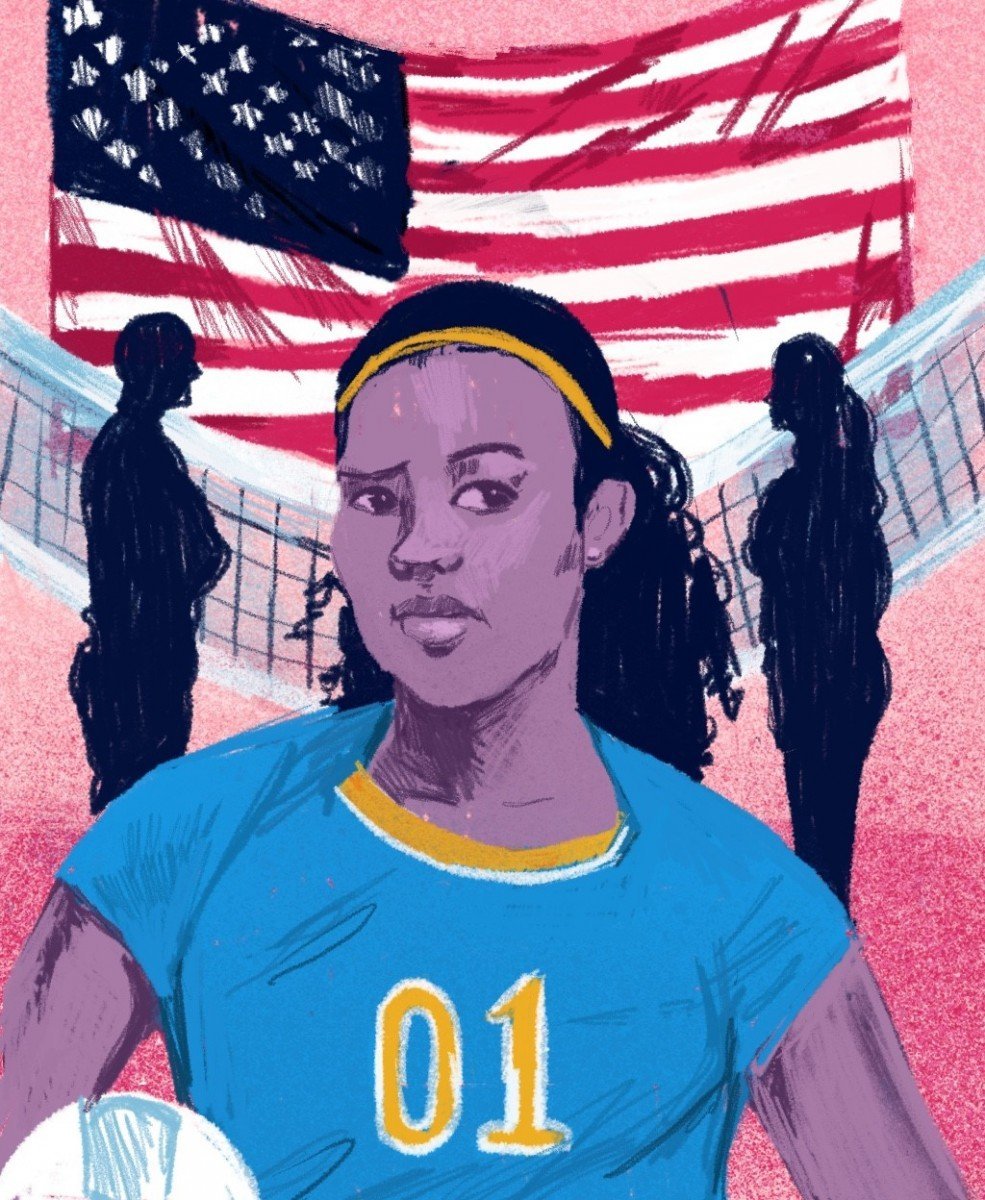 The Richmond-based illustrator Carson McNamara produced this and five other illustrations to accompany each episode of American Dissent.

We had to call it something,” Kelley Libby told me, referring to a new, five-part podcast she developed in collaboration with James Madison’s Montpelier. “So we decided on ‘American Dissent.’”

I was in Libby’s office back in July, when the series, released on September 17, was still under production. “How’d you come up with that name?” I asked, and Libby, a producer on Virginia Humanities’ radio program With Good Reason, gave me a curious look.

“Okay, I get it,” I said. “It’s about dissent in America. But why focus on that? How does that come back to Madison?”

Libby explained that the collaboration began with the idea of creating a podcast that investigated Madison and the U.S. Constitution, placing them in a contemporary context.

“We had all this freedom to come up with whatever we wanted. And I just kept coming back to this idea of religious dissent. That’s where I started—the idea that without it we wouldn’t have the First Amendment as we know it.”

One important strain of the American Revolution involved a rebellion against the established church, which required the support of all taxpayers regardless of their beliefs. Thomas Jefferson’s Statute for Establishing Religious Freedom, passed in 1786 but drafted in 1777, played an important role in that. But Madison was critical, too. “He went to what’s now Princeton, a Presbyterian university, right?” I said.

“My understanding is that when he graduated from college and moved back home he was really upset that the Baptists who lived in his neighborhood in Orange were being persecuted for conducting their own marriage ceremonies. He wanted to respect the rights of this minority.”

“So you started there, with religious dissent—”

“And meanwhile, Price Thomas, my collaborator and Montpelier’s vice president of marketing,” Libby continued, “he was really interested in the conversation about Colin Kaepernick and his protest of racial injustice.”

Libby said that the podcast attempts to connect the forms of dissent that set in motion the founding of the United States and that are now embedded in the Constitution with the kinds of conversations people are having today.

“Basically, I’m interested in how dissent makes America America,” she said. “I recently saw a sign at a rally that read, ‘Dissent is patriotic.’ That’s what I’m finding over
and over again. Every story someone tells, or every bit of scholarship seems to point to this idea, that this is what we do as Americans. And sometimes I think the word ‘dissent’ carries this negative connotation, like people think of it as though you’re just causing a stir.”

I mentioned how I’ve noticed that a lot of dissent, especially when it’s successful, gets retrospectively cleaned up, so it seems less messy and loud. A historian recently mentioned how the lunch counter sit-ins during the civil rights movement have undergone this process, leading some to forget the ways in which dissent can be uncomfortable and ambiguous.

Libby said that she interviewed Lorri Glover, a professor of history at St. Louis University, about the fierce debates over ratification of the Constitution. In Virginia, Patrick Henry and George Mason were pitted against James Madison over how strong the federal government ought to be. Henry refused to attend the Constitutional Convention at all, famously saying, “I smelt a rat.”

“Another scholar was telling me that some of the religious dissenters were put in basement jails where people on the street would urinate on them,” Libby said. “So yeah, dissent could get messy.”

Libby, who hosts the podcast, told me that she wants it to reach an audience that’s a little different from the typical public radio program. “We’re looking for a younger audience,” she said. “I feel like the podcast listeners who are like me—in their thirties, interested in scholarship and social issues and also in just being entertained—our ears are grabbed up already. The best way to reach people is to reach them when they’re young and they’re in school. So we’re crafting this series with high school students in mind.”

She said they didn’t just talk to scholars such as Glover. They also went to a high school—well, a former high school: the Moton Museum in Farmville, where Virginia Humanities’ director of African American Programs and the museum’s former director, Justin Reid, gave Libby and Thomas a tour and talked about the student walkout in 1951 that led to the famous Supreme Court ruling Brown v. Board of Education.

And Libby interviewed students, including a student athlete from Tandem Friends School in Charlottesville who, before a volleyball match at Quantico, took a knee during the national anthem. It caused an uproar. Parents complained. Another team forfeited a match rather than play Tandem. The school took the energy surrounding the protest and channeled it into a Diversity Summit, organized in March 2017.

“And this all stemmed from that spark, this little voice in her head that just said, ‘Don’t,’” Libby said.

Released on Constitution Day (September 17), the series American Dissent can be downloaded from James Madison’s Montpelier and from podcast distributors, including iTunes and Stitcher. Episodes will also air on With Good Reason.