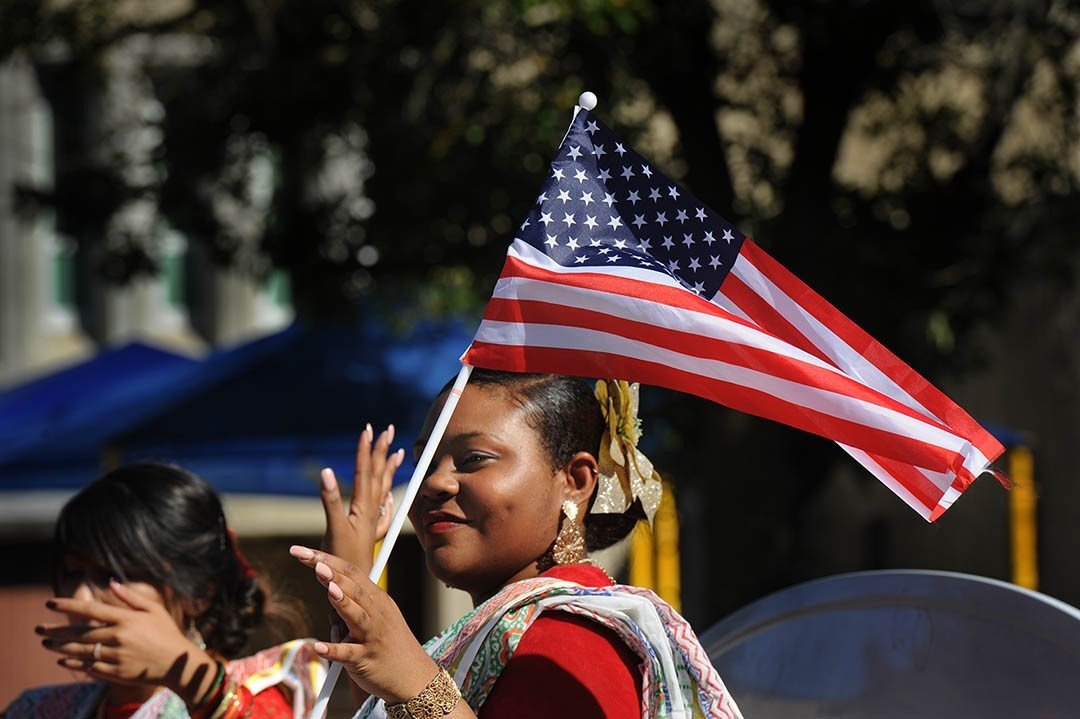 A woman waves an American flag at the Prio Bangla festival in Arlington. A recent grant from VA Humanities will fund an interpretive publication, to be distributed in conjunction with the festival, featuring interviews with more than a dozen immigrants and refugees. Photo Courtesy © Lloyd Wolf / Columbia Pike Documentary Project

Virginia Humanities announces $140,900 in recent grants to twenty-five nonprofit organizations in support of public humanities programs for audiences throughout the Commonwealth and beyond.

The Virginia Humanities Grants Program helps communities share and preserve their history and convene conversations around issues relevant to Virginians. Virginia Humanities has been awarding grants to museums, historical societies, and other cultural non-profits across the state since 1974, reaching every corner of the Commonwealth.

“Virginia Humanities has always worked to build stronger communities, cultivate a more complete understanding of our collective history, and celebrate our rich cultural heritage,” said Matthew Gibson, Virginia Humanities’ executive director. “Helping Virginians better understand each other and our shared histories is central to our mission, and the projects funded in this grant cycle will do just that.”

The following organizations received grants from Virginia Humanities between January 1 and June ­­­28, 2019:

American Frontier Culture Foundation (Staunton): $1,200
A four-part lecture-discussion series organized around several events and themes central to Virginia’s 2019 Commemoration: the arrival of the first Africans in 1619; entrepreneurship and economic innovation; Thanksgiving in 1619; and women in early Virginia.

The Center for Community Engagement and Career Competitiveness at Averett University (Danville): $2,500
A three-part lecture/community-discussion series, part of a larger “cultural programming” effort designed to connect the communities of Averett University and the Danville region.

Cheroenhaka (Nottoway) Indian Tribal Heritage Foundation (Southampton County): $7,000
Development of interpretative signage to be installed as an outdoor exhibition on Cheroenhaka tribal land, focusing on native flora and fauna and their relationship to the Tribe’s history and traditions.

Chrysler Museum of Art (Norfolk): $7,000
A series of programs for teachers and the public, complementing a new exhibit on Jeffersonian architecture in Virginia and exploring the paradoxical relationship between Enlightenment ideals of equality and the institution of slavery.

Gallery 5 (Richmond): $3,000
A series of facilitated public conversations connecting aspects of Richmond’s history to issues in the present day.

Maymont Foundation (Richmond): $9,000
A panel discussion, printed brochure, and development of lesson plans to coincide with the redesign of a landmark exhibit on the lives of African American domestic workers at Maymont during the “Gilded Age”.

Norfolk State University (Norfolk/Statewide): $2,500
Planning for the redesign and expansion of an existing website on emigration from Virginia to Liberia in the early to mid-1800s, currently the most comprehensive resource of its kind devoted to this subject.

Petersburg Preservation Task Force (Petersburg): $10,000
Production of the first two exhibits for the newly renovated Petersburg Exchange, focusing on the histories of tobacco commerce and of water-powered industries in Petersburg.

Prio Bangla, Inc. (Arlington): $10,000
An interpretive publication (print and digital versions) to be distributed in conjunction with the eighth annual Prio Bangla festival, a multi-cultural event honoring the diversity of Northern Virginia.  The publication will include interviews with more than a dozen immigrants and refugees from all parts of the world.

Springhouse Community School (Floyd): $2,000
A week-long series of events exploring the themes of liberation and belonging through song, focusing in particular on the shape-note singing tradition practiced in Appalachia and other rural American communities since the Colonial period.

Temple Beth El (Williamsburg): $1,400
A public lecture and discussion program on the history of Jewish life in Virginia and on new waves of antisemitism linked to the rise of white nationalism nationwide.

The Valentine (Richmond): $9,000
An exhibit and printed catalog exploring the story of the HIV/AIDS epidemic in Richmond through the experiences of advocates, caregivers, and people currently living with the disease.

Victory Hall Opera (Charlottesville): $1,350
A public panel discussion in which five African American women scholars and artists examined the influence of Sally Hemings’ story in their own work and in a broader cultural context.

Video Action, Inc. (Statewide): $8,000
Production of a six-minute film on writing as a force for physical as well as social healing among women diagnosed with cancer.

Virginia Organizing (Albemarle): $10,000
An exhibit on the history of B.F. Yancey Elementary School, an important educational and cultural center for African American students and their families in Albemarle County from 1960 until its closure in 2017.