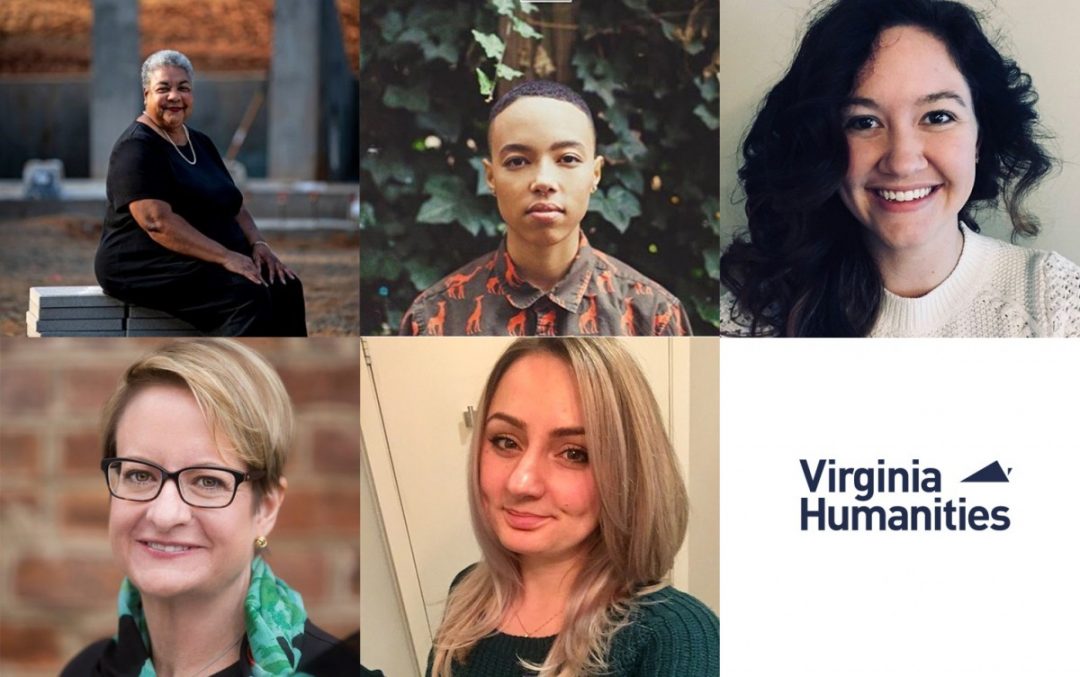 We’ve welcomed five new staff members in 2020, all of whom bring passionate interest to their work, both inside and outside the office. We would love for you to be able to meet them in-person when you visit our office or at a public event. Obviously, that’s not possible right now. But we still wanted to introduce you to them.

All five of these new staff members joined us at a challenging time. Some started days before or just after we all began working from home due to COVID-19. So even we haven’t all had a chance to meet some of them in-person. But we’re thrilled to have them as part of Virginia Humanities. And we hope you’ll join us in welcoming them to our team and making them feel at home.

Cauline Yates was hired earlier this year as a part-time receptionist. Born and raised in Charlottesville, she devotes much of her free time to volunteering in the local community. Cauline is a community member of the Memorial to the Enslaved Laborers Committee (the memorial currently in construction on grounds at the University of Virginia) and helps educate teachers and high school students about African American history through speaking engagements.

Lauren Francis is an associate producer for With Good Reason. A Richmond native, Lauren has a background in television news, where she’s worked as an assignment editor, in addition to publishing print and broadcast journalism. Lauren is deeply curious about food justice, public history and preservation in Virginia and experiments with sound as both an archival and futuristic tool.

Meggan Thomas is our new corporate and foundations manager. In that role, Megganfosters relationships with other organizations throughout the Commonwealth. Meggan grew up in Florida, earned her B.A. in Economics and Theology from Boston College, and worked for two years as a Peace Corps Volunteer in West Africa. Motivated by her passion for causes such as food security and affordable housing, she has since worked for a variety of nonprofit organizations including the Food Bank for the Rockies and Habitat for Humanity.

Patricia Miller recently joined us as the editor of Encyclopedia Virginia (EV). She is an author and journalist with a special interest in women’s history: In addition to her 2018 book, Bringing Down the Colonel: A Sex Scandal of the Gilded Age and the “Powerless” Woman Who Took on Washington, Patricia has written about women’s rights and the role of women in politics for publications including The Atlantic, Salon, and The Nation, among others. Under Patricia’s leadership, the EV team will continue to expand its entries to reflect the often-overlooked role women and other marginalized people have played in Virginia’s history.

Yelena Markazyan grew up in the Ukraine and moved to California with her family, as a teenager, twenty years ago. She holds an associate’s degree in math and science and was recently accepted into nursing school at Piedmont Virginia Community College. Earlier this year Yelena started working with us part-time helping our grants program with administrative tasks.