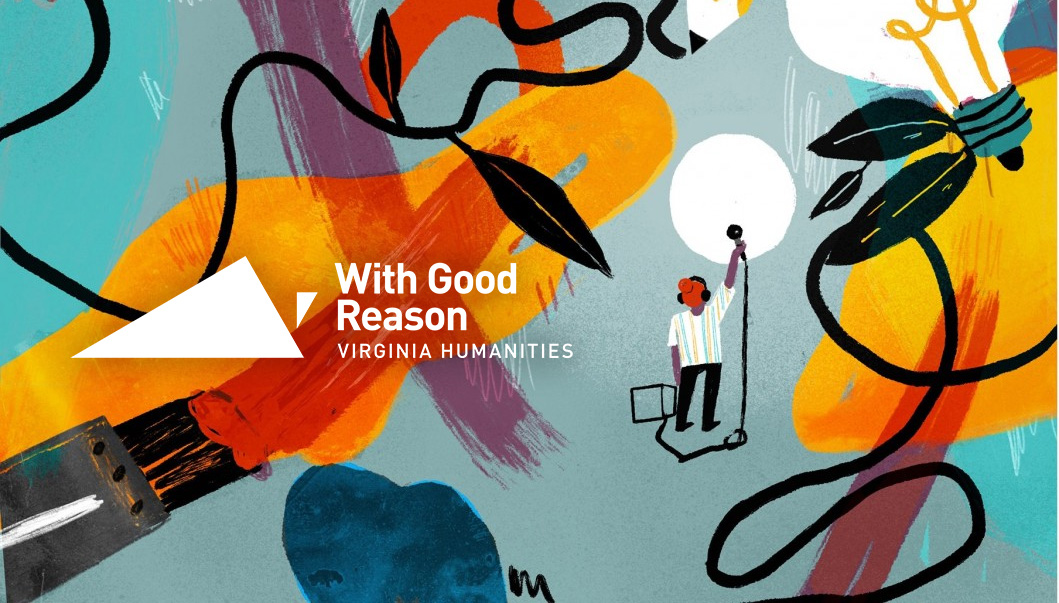 With Good Reason (WGR), our weekly, nationally-broadcast, public radio program, has been on the air for more than twenty years, consistently placing interesting, Virginia-based scholarship in the hands—or ears—of curious listeners nationwide. Producing a weekly radio show and podcast in the midst of a pandemic has presented some unique challenges for our WGR staff. We recently checked in with them to see how COVID-19 is changing the way they work.

Over the years, WGR has featured voices from professors across the state, and covered what seems like nearly every topic under the sun. “The sky’s the limit on what the subject of any given show might be,” says host and executive producer Sarah McConnell. Just a few recent examples include “COVID: The Threat is in the Air,” a look at the current status of a vaccine with input from a pharmacologist, a medical doctor, and a civil engineer; “How to Go Clubbing,” a rebroadcast from pre-COVID-19 times that examines the history of LGBTQ nightclubs; and “Whose Suffrage?,” commemorating the passage of the Nineteenth Amendment by tracking the persistent racial inequalities in the fight for women’s suffrage. In the weeks leading up to the presidential election, WGR also launched #WhyIVoteVA, a social media campaign that asked Virginians to explain why voting matters to them. The answers that came in were often inspiring. One listener, for instance, cited the enduring influence of her grandmother: “I will always use my right to vote because it was so hard-earned by the women before me.”

As senior producer Allison Quantz points out, the pandemic has heightened everyone’s need for human connection and intellectual stimulation, which is precisely what WGR seeks to provide: “We get inside your earbuds—inside your head—with the voices of your neighbors and your community. These days, when we give people an opportunity to talk, they want to take it. Every time.”

Prior to the coronavirus pandemic, giving a scholar or community member the “opportunity to talk” usually meant sending them to a radio studio—either the one at the Virginia Humanities office in Charlottesville, or a local studio close to them. But now, WGR has opted for an at-home, smartphone-friendly technique called a tape sync. “I go to the studio and record myself as usual,” McConnell explained. “And the guests are guided by the associate producers on how to record themselves on their own terms.” This involves sitting at a desk, perfectly still so as to minimize background noise, with a cellphone held to each ear. The guest talks to McConnell on one phone and records themselves on the other. At the end of the call, they send the recording to the producers, who sync it with McConnell’s questions.

Oftentimes, these at-home recordings come with background noises and familiar intrusions—dogs barking, lawns being mowed outside, earrings clinking against the phone. But the WGR team, McConnell said, have come around to seeing such sounds “as sort of a very human part of the experience of the times of COVID-19. The audio isn’t going to be as clinical and pristine and perfect as it was before, and that’s okay.” (An artful approach to editing helps, too.)

The WGR team was well prepared for the kind of remote work COVID-19 has required. Since Quantz works from Bloomington Indiana, and the rest of the team (including associate producers Matt Darroch and Lauren Francis; and technical director Jamal Millner) are based in Virginia, the producers were already used to virtual meetings.

“In radio, being a ‘producer’ means you do a little bit of everything,” Quantz explained. At WGR, “everything” entails working out the logistics of each show, arranging calls, doing background research on each topic, and writing interview questions and transitions. Producers also conduct a pre-interview with each guest to collect information that helps McConnell prepare for the actual interview. Then, there’s the technical side of production—cutting the audio, and adding what Quantz terms the “storytelling elements” of music, sound effects, and narrative transitions. The producers alternate these jobs on a rotating schedule, which gives everyone a turn at being lead producer.

Francis is the newest addition to the WGR team—she joined in March, just as the governor was issuing the first stay-at-home order. She’s optimistic about working remotely for the foreseeable future and says it has been a bonding experience. As she put it, “there’s no better teambuilding activity” than solving the problems of producing a radio show during a pandemic. And she says producing WGR is especially important in this moment. Compared to her previous work in fast-paced newsrooms, Francis says a weekly radio show “really gets to the heart of things. Or at least is more willing to get closer to the bone.”

That kind of curiosity and willingness to examine difficult issues is exactly what has fueled WGR for the last two and a half decades. And it’s what will continue to propel it forward during and after the pandemic.

Visit WithGoodReasonRadio.org to listen to recent episodes, subscribe to their podcast, or find out when it is broadcast on your local public radio station.