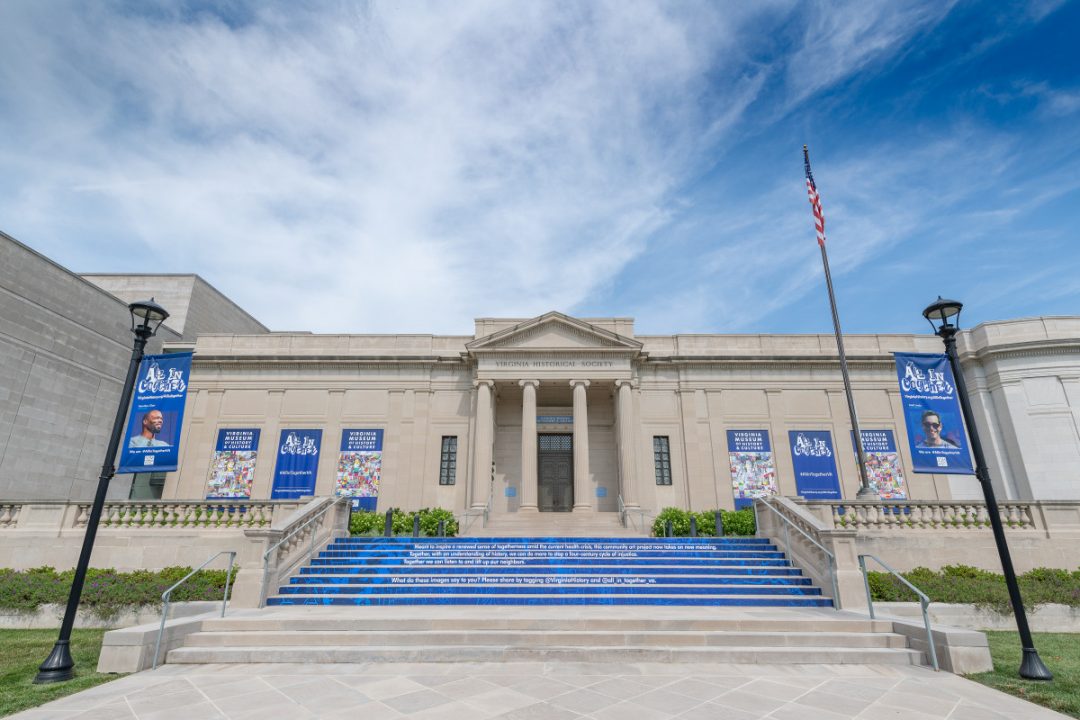 What if history happens and no one is there to record it? That’s what the Virginia Museum of History and Culture (VMHC) was facing as the COVID-19 pandemic decimated its operating revenue just as the pandemic and the ongoing protests against police brutality and racial injustice unfolded on its doorstep in Richmond.

But a $10,000 Coronavirus Aid, Relief, and Economic Security (CARES) Act grant, in combination with other funding, allowed the museum to retain its staff and continue its mission of telling “the evolving story of the commonwealth,” says VMHC president and CEO Jamie Bosket.

Museum archivists collected journals describing the experience of living through the historic pandemic, as well as artifacts “that represent the peaceful and passionate protests and also some of the devastation and heartache that comes with this sort of social unrest within a community,” says Bosket. “When the flow of life gets disrupted is a time when culture and community are more important than ever.”

In order to preserve cultural and historical repositories in the face of the economic disruption caused by the pandemic, the National Endowment for the Humanities (NEH) earmarked $30 million in grant money from the CARES Act, which was passed by Congress in March 2020. The NEH then distributed the funds through the fifty-six state and territorial humanities councils, including Virginia Humanities, which received a little more than $600,000 between April and July.

Realizing the seriousness of the situation facing museums, libraries, historical societies, and other cultural nonprofit organizations across the state, which saw their revenue dry up as their doors closed under stay-at-home orders, Virginia Humanities created a needs survey to gauge the extent of the crisis in the humanities community and worked to distribute the funds as quickly as possible. More than 150 organizations replied to the survey, indicating that “the impact was going to be pretty severe on all organizations,” says Sue Perdue, Virginia Humanities’ chief information officer and a member of the grant distribution committee.

In mid-May, Virginia Humanities dispersed $599,500 in grants to 110 nonprofit cultural organizations throughout the state ($1,500 was used to administer the grants). An additional $8,000 was awarded to two organizations in July. Grant amounts ranged from $1,000 to $10,000 and were scaled to an organization’s operating budget. Unlike most NEHfunded grants, the recipients didn’t have to come up with a special project or deliverable, says Perdue; they just had to demonstrate that they needed the money to sustain operations.

Distributing the CARES Act funding to struggling cultural organizations in record time wasn’t the only pivot Virginia Humanities had to make at the start of the coronavirus pandemic. In mid-March, the Virginia Festival of the Book staff faced an agonizing decision: The infection rate in Virginia, as in much of the mid-Atlantic region, was climbing. There were whispers of potential closures, but in much of the state it was still business as usual. Would it be safe to hold the five-day festival, which routinely brings hundreds of authors and tens of thousands of attendees to Charlottesville? The answer came on March 10, when the Festival of the Book announced “with heavy hearts” the cancellation of the 2020 festival.

It was the first major event in the area to cancel because of COVID-19, and the decision reverberated across the commonwealth. Choosing to cancel the event felt “iffy” at first, says Sarah Lawson, the assistant director of the Virginia Center for the Book, “like we were going out on some crazy limb.”

But the decision, made by Lawson and the center’s director, Jane Kulow, turned out to be the right one and a harbinger of what was to come: The very next day, the World Health Organization declared COVID-19 a global pandemic, and by the end of the month, Virginia governor Ralph Northam issued a statewide stay-at-home order.

After working out the cancellation details and “mourning what would have been, we started thinking about what could still be,” says Kulow. Toward the end of April, the Center for the Book launched Shelf Life, a series of virtual book talks streamed to Zoom and Facebook every Tuesday and Thursday at noon. Each session featured a new coupling of authors in conversation, many of whom were writers originally scheduled to appear at the festival.

Gabriel Bump was touring in support of his debut novel, Everywhere You Don’t Belong, when the pandemic shut things down. More than 300 people were in attendance at his Shelf Life session as he discussed his book, a comic coming-of-age story that deals heavily with race in America, on May 26, the day after George Floyd was killed by police in Minneapolis, spurring weeks of protests about racial injustices. Bump was heartened that he could continue to connect with readers and that books remain more relevant than ever. “Especially now, people need to escape, and they’ll do it by a book,” he says.

NoNieqa Ramos, a picture book author and young adult novelist who participated in Shelf Life, says that while nothing can replicate the experience of an in-person reading, virtual sessions can be accessed by more writers and readers alike. “People can ‘attend’ events that might have been previously inaccessible because of cost, childcare, or health reasons,” says Ramos. Post-pandemic, she hopes that literary organizations will adopt a hybrid of inperson and virtual readings to make event access more equitable.

“Building empathy through shared stories is important to us,” says Kulow about the Center for the Book, and now they’re able to do it in a brandnew way, and for a broader audience: So far, Shelf Life has reached viewers in more than twenty U.S. states and eight countries. Another advantage of virtual events is that without the need for months of advance planning, they can easily be scheduled to address important topics as they arise.

Making the switch to virtual programming wasn’t the challenge for the Virginia Folklife Program. For years, the program has maintained a robust YouTube channel, Flickr photo site, and SoundCloud page to increase both preservation of and access to folk artists and events. But Jon Lohman, former director of the Virginia Folklife Program, knew that many master artists and artisans who make their living from in-person events—whether it’s an oldtime fiddle concert or a hip-hop dance lesson— were struggling financially in the wake of COVID-19 05 cancellations. His solution was the Teachers of Remote Arts Instruction Network (TRAIN), a webbased directory of dozens of Virginia artists and artisans available to teach virtual lessons, which was up and running on the Folklife website by early April. Anyone interested in learning a new skill from an area expert can search TRAIN by artist name or by trade, or scroll through the alphabetical listings.

Jared Pool, a Richmond-based progressive bluegrass musician who tours with Larry Keel, lost quite a bit of income due to cancelled gigs. Knowing he’d have more time on his hands, he signed up for TRAIN and acquired new guitar and mandolin students as a result. Teaching virtually was challenging at first, says Pool, but he’s come to enjoy it—students seem to take more responsibility for their own learning when there’s a screen between them. Pool is grateful for the way Virginia Folklife moved quickly to help him and other artists “keep the ball rolling on this stuff, instead of feeling like we’re just spinning our wheels.”

“This is a very challenging time, because humanities are about people coming together,” says Lohman. “But there are tools, as we’re finding in this digital space, where we can be connected.” The humanities are often trivialized, Lohman adds, considered luxuries instead of necessities, and are often the first programs to lose funding when money becomes scarce. But there’s a strong case for supporting them through trying times. It’s through these traditions—stories, music, community gatherings, and more—that people express things like “This is who I am,” “This is who we are,” “This is our community,” says Lohman.

And that is something we cannot afford to lose.

Find out more about upcoming events from the Virginia Festival of the Book at VaBook.org.