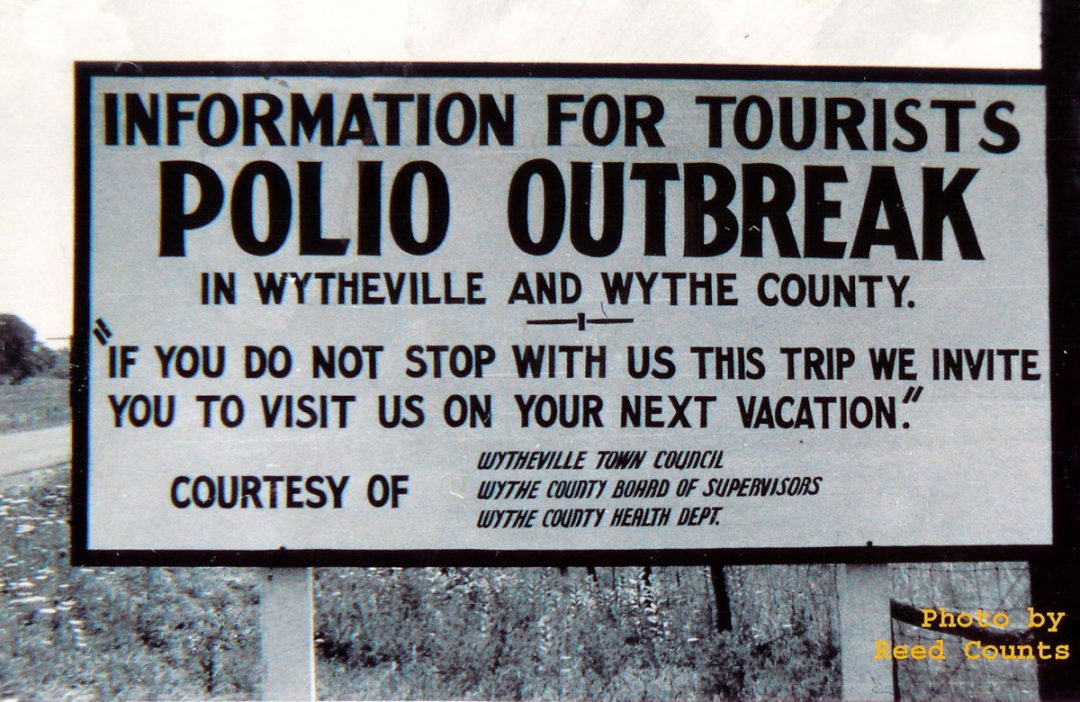 In 1978, the historian Barbara Tuchman published A Distant Mirror: The Calamitous Thirteenth Century. It described a century scarred by hideous disparities of wealth and privilege, “forever wars,” and the Bubonic Plague.

Seven hundred years later, as the world waits for a vaccine that will stop the spread of the COVID-19 virus, Virginia offers another kind of mirror, less distant from our own time and much closer to home.

In 2003, we awarded a grant to the Wytheville Department of Museums supporting oral history interviews, an exhibition, and a book exploring the history of a local health crisis in Wythe County, Virginia.

We could not possibly have known that, seventeen years later, this story of “A Summer Without Children” would connect to the experience of every Virginian—and every American.

Over a thirty-year period before the release of the Salk vaccine in April 1955, Polio struck hundreds of thousands of people in the United States, and it hit the nation’s children especially hard.

By the late 1940s, the nation was gripped by fear of the disease, which is caused by a virus that affects the nervous system leading to paralysis of the limbs, throat, or chest; and in extreme cases, death.

No one was immune, including the future President Franklin Roosevelt who contracted what was then known as “infantile paralysis” in 1921, at the age of 39, and struggled with its effects throughout his public life.

In the summer of 1950, Wythe County had the highest incidence of Polio cases per capita of any city or county in the country. To this day, no one is sure exactly why. But in Wytheville, the county seat with a total population of only 5,500, there were 184 cases that summer, one in every 30 people. Statewide, the death rate from the disease was five-percent; in Wythe County, it was almost ten.

Statistics shed light but they don’t tell the story. Which is why the personal accounts the Summer Without Children book and exhibit document are so important; and why they seem so close today.

As the cases began to pile up, the local medical system was overwhelmed. Every headache caused panic. Doctors were working around the clock, running checks. Parents kept their children inside, fearing infection. People distanced themselves from one another. The local tourism industry shut down.

Businesses, swimming pools, the local theater and other public facilities closed. The streets downtown were deserted. Farmers were afraid to take their livestock to market. If you lived in the country, you made your visits to town as short as possible.

Wytheville was known then as a “baseball town.” The local team, “The Statesmen,” cancelled their season. The first documented case that summer was the second baseman’s infant son.

People remember being afraid to touch money; washing their hands constantly; having groceries delivered and left on the sidewalk. A few wore amulets or charms in hopes of fending off the disease. There were rumors that butterflies or spiders had caused the outbreak. Home remedies included silver injections, flaxseed poultices, and castor oil.

DDT was sprayed in the local factories. Ambulance drivers burned formaldehyde candles in the cab between runs to Roanoke Memorial Hospital eighty miles away. And because Roanoke Memorial refused to admit them, Black residents of the county had to be transported to St. Phillip’s Hospital in Richmond.

There was an ever-present fear of a disease whose origin was mysterious and whose “vectors” were unknown. What people did know is that the results could be devastating.  The thought of being paralyzed or permanently disabled—or having this happen to a spouse, a parent, a child—haunted everyone.

Families with small children left the area if they could—to stay with relatives or friends.  Parents who couldn’t leave—or chose not to—faced the challenge of how to keep their children safe indoors but occupied with enough distractions to fend off boredom.

Bad as the epidemic was, what came first to mind for many of those interviewed decades later was how people helped and supported each other, often at great personal risk.

People remember the isolation; long days spent playing games like “Fish” and checkers.  They also remember reading more than ever. Most households still didn’t have televisions; and people relied on the local newspaper to keep them informed with facts, however painful or unsettling.

Bad as the epidemic was, what came first to mind for many of those interviewed decades later was how people helped and supported each other, often at great personal risk. Dr. Charlie Graham tended the sick and did his best to try to get the Roanoke Hospital to admit everyone who had been stricken, regardless of race. D. L. Barnett drove his ambulance (actually a hearse) back and forth to Roanoke carrying sick patients, sometimes 2-3 times a day.

By late August, the number of new cases was in decline, but reopening of the local schools was delayed multiple times, into October. Some people with the disease recovered quickly. For some, it was a lifelong ordeal; of time spent in iron lungs and metal leg braces, of expensive treatments and—for many—a return of the disease years later in a syndrome called poliomyelitis.

All these parts of the story, and more, are documented in the exhibit, which is still on display in Wytheville; and in the book, A Summer Without Children, which is still available for purchase by contacting the Town of Wytheville Department of Museums.

Polio brought national attention to Wythe County. A Washington Post article written in the aftermath of the “Summer Without Children” called Wytheville “the town that kept its head.” In an essay written for the book, David Huddle, who was born and raised in Ivanhoe, just a few miles from Wytheville wrote: “In a time of fear and suffering, our people responded with courage and decency.”

And this may be the important reason why all Virginians can look to the summer of 1950 in Wythe County—a not-so-distant mirror after all—for hope and inspiration. That fall, speaking on a national broadcast organized by CBS Radio and the National Foundation for Infantile Paralysis, then-Mayor Bill Arthur said: “…None of us will ever forget how it was when the epidemic struck. We helped each other all we could. We became a community with one purpose only—to fight polio.”

Read excerpts of some of the oral histories collected for this project on the Wythe County Historical Society’s website.