A new film tells the story of two artists and their memories of segregated Alexandria. 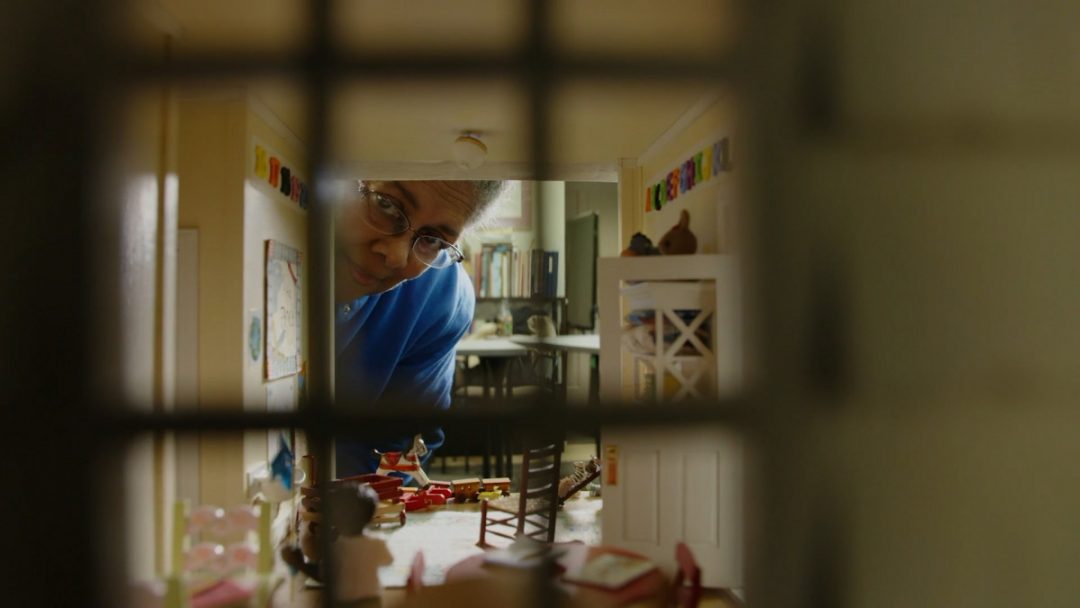 “We didn’t set out to make history. It was just a hobby at first,” says dollhouse artist and Alexandria native Sharon Frazier. “But then Linwood started making more and more. He said, ‘We should do our town.’ And so, here we are.”

Since 1994, longtime friends Frazier and Linwood Smith have combined their talents—her meticulous eye for detail, his virtuosic building skills—to replicate and miniaturize many of the cultural institutions and businesses they grew up with during the 1950s in Uptown and in the Berg, two segregated, historically African American communities in Old Town Alexandria. Smith and Frazier’s work is preservationist by nature, since many of the landmarks they’ve miniaturized have since been razed or reconfigured. To recreate places that no longer exist, they draw on their own treasured memories, and also on old photos, video footage, maps, and the shared recollections of people in the community.

Their historical dollhouses are the subject of Robin N. Hamilton’s short film Our Alexandria, which was partly funded by a Virginia Humanities grant in 2019. Hamilton first encountered the dollhouse collection in 2018 at the Alexandria Black History Museum. She was drawn to the houses, she says, not only because she has “always loved miniatures,” but also for their accuracy, which makes each one a tangible and uniquely charming lesson in local history: “These houses are actual snapshots of Sharon’s and Linwood’s lives. This is steeped in real, concrete events.” After looking at the dollhouses and learning the history of the city’s African American communities, Hamilton says, “you will look at the buildings in Alexandria differently, and analyze them differently.”

In Our Alexandria, close-up shots of the dollhouse interiors (think thimble-size wigs and exquisitely crafted tiny heating tools in the beauty shop; scaled-down Life magazines with historically accurate covers in the public library reading room; mini crucifixes in each room of Smith’s boyhood home) alternate with archival video and photos courtesy of the Library of Virginia. When recounting what it was like to experience segregation, Smith and Frazier don’t shy away from discussing Alexandria’s backdrop of racial inequality. But they also describe the joyousness of home life and the sense of resilience and pride that characterized their tight-knit communities. Reflecting on the purpose of her artwork in the film, Frazier says, “I want people to know what it was like in Alexandria back when we were growing up. I want them to know that Black people in Alexandria made a lot of contributions.”

Also featured in Our Alexandria is Audrey Davis, executive director of the Alexandria Black History Museum, who uses the miniatures as tools for teaching local history. One dollhouse kept on permanent display at the museum is Smith and Frazier’s replica of the Robert H. Robinson Library. The real-life library, opened in 1940 to circumvent integration of Alexandria’s public library, was housed in the very same gallery space where the dollhouse now sits until the library closed in 1983. Complete with nameplates for the librarians remembered by Frazier and Smith, the dollhouse helps tell the story of a 1939 sit-in, led by a local attorney named Samuel Wilbert Tucker at Barrett Library, then a whites-only facility and the only public library in the city. “There are so many unsung heroes in this community,” Davis said. “They’re not a Rosa Parks, not a Martin Luther King, but maybe they got the library integrated. And because of that, they made a difference. Samuel Wilbert Tucker fought segregation in Alexandria and eventually helped get the library integrated. But first, his sit-in in 1939 helped get the Robert Robinson Library built. Sharon and Linwood used that facility; that was where they learned. That’s an important story.”

Hamilton’s film focuses on another segregated African American facility frequented by Smith and Frazier as children, the Johnson Memorial Pool. The pool has since been torn down, making it what Davis calls a “phantom site” in the city, or a culturally significant place whose physical absence puts it in danger of being left out of mainstream narratives of history. Smith and Frazier share vivid memories of swimming and taking lessons at Johnson Memorial Pool, and their miniature version of the facility captures much of that cheerfulness. But the story of the creation of the pool in 1951, as told in Our Alexandria, stemmed from a tragic drowning incident and subsequent activism on the part of African American residents who wanted a safe place for their children to learn to swim. Construction of the pool followed the deaths of two brothers, Lonnie and Leroy Johnson, ages nine and eleven, who drowned while playing in the Potomac River. Smith, who was eleven at the time, recalled how “before the pool, children would go down to the river and swim. The brothers took a cardboard box, and went in using it for a boat. One of them went under, and the other went in to try to save him. And both of them drowned. The whole community was upset about that. People were up in arms; they talked to the city, and they talked them into building Johnson Pool.”

To tell this story in the film, Hamilton interviews Francis Terrell, a cousin of the Johnson brothers, and also includes newly uncovered archival video footage from the pool: kids jumping off the high dive, splashing in the water, eating popcorn after swimming. The footage was provided by Shirley Lee, a former Johnson Memorial swim instructor who taught Frazier and other children to swim, and who later went on to become one of the first certified African American scuba divers in the US. Lee’s video footage, plus a conversation with a former lifeguard, helped Smith and Frazier to construct their model of the pool. It was an especially challenging project, the artists said, because of the difficulty in recreating the water. After a few false starts, Smith finally had the idea to use a photo transfer of a swimming pool, printed on textured plastic for a convincing replica.

You don’t need to be a dollhouse enthusiast to get excited about Smith and Frazier’s work. As Davis has observed, the specificity, detail, and accuracy of their replicas tends to inspire universal awe. “Every time we’ve had the show at the Black History Museum, we’ve had huge attendance. It’s so much fun to see young and old share experiences. You hear these conversations. Even teenagers who you think would be kind of not too excited about this get really into it, and they’re so excited about meeting Linwood and Sharon,” she said. Frazier and Smith normally attend every show, sharing anecdotes with visitors and occasionally, in Smith’s case, forcing them to do double takes by dressing identically to his mini-me, a figurine that wears a red button-down shirt and khakis. “When people come to the museum, and Linwood walks around, he tells them stories about these places,” said Frazier. “Well, we both do,” she added, “but he embellishes with his jokes.”

As a filmmaker, Hamilton said, “It can be hard to convince people that local stories like this matter. If I was going for a big national grant, I don’t necessarily think I would have gotten support. The fact that Virginia Humanities appreciated the importance of this story, how it’s timely, how it reveals people who have made such a contribution to the community: I am really, really grateful.”

Perhaps unsurprisingly, Our Alexandria has been extremely well-received. It won Best Documentary Short in the DC Independent Film Festival and is appearing as a feature in the virtual Race/Equity and Inclusion event for the City of Alexandria Employees Program in 2021. And, when it’s safe to do so, the Alexandria Black History Museum will reopen to the public and the dollhouses will be reinstalled for another run. Visit the museum site for updates about a reopening date.

Visit Robin Hamilton’s website to learn more. You can also view and read about the collection in this exhibit catalogue. And check out the entries on the Uptown and Berg neighborhoods available through our AfroVirginia website.