The Lasting Importance of the New Deal-Era Virginia Writers Project 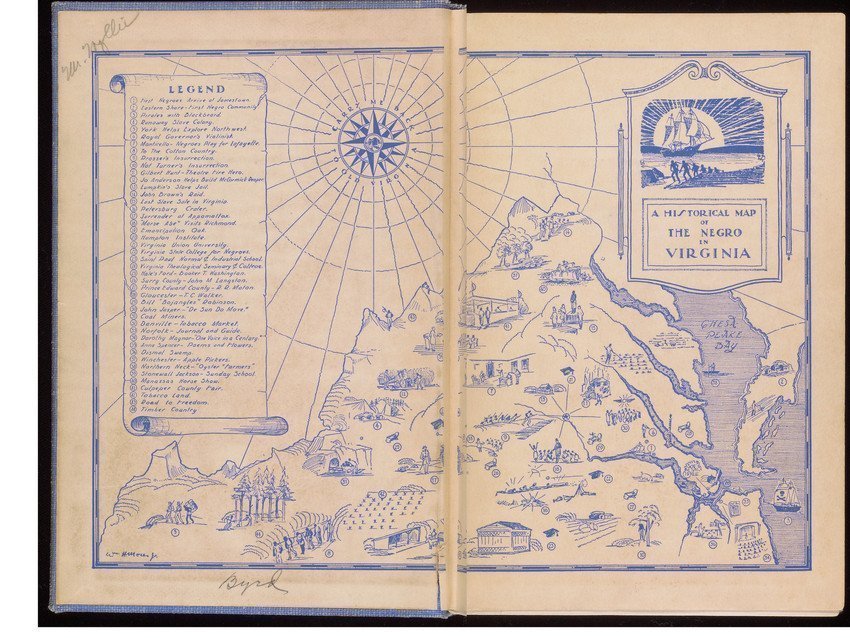 Illustrated endpapers of The Negro in Virginia (1940) - Courtesy of Special Collections, University of Virginia

Just last week, Congress approved the American Rescue Plan Act of 2021 (ARP), with it designating $135 million in federal funds to the National Endowment for the Humanities (NEH) in recognition of the devastating economic toll the Coronavirus pandemic has had on cultural and artistic organizations and activities nationwide.

While the circumstances of the 2021 recession are in many ways unique to the pandemic, cultural relief funding of this scale isn’t unprecedented. In fact, large-scale federal support for the humanities has its roots in Great Depression-era initiatives launched through President Franklin Delano Roosevelt’s Second New Deal, which went into effect in the spring and summer of 1935. In light of the recent NEH news, we’re turning our attention today to two particularly resonant entries in our Encyclopedia Virginia, the Virginia Writers Project and The Negro in Virginia (1940).

On May 6, 1935, President Roosevelt issued an executive order designating $4.9 billion ($26.57 billion in today’s dollars) in funding for the Works Progress Administration (WPA), an agency tasked with creating jobs for millions of unemployed Americans. The WPA’s most immediately visible legacy can be observed in infrastructure projects—bridges, highways, airports, waterlines, and public parks across the United States—produced by employees of its public works program. Equally enduring are the contributions left behind by the Federal Writers’ Project (FWP), the branch of the WPA aimed specifically at employing authors, editors, journalists, librarians, and other humanities-oriented workers struggling to find work in their fields. Hoping to create a “self-portrait of America,” the project’s first director, Henry Alsberg, tasked FWP workers in each state with collecting and transcribing “life histories” and folklore (songs and chants, children’s games, legends, and other forms of storytelling all fit into this category) from working people whose cultural inheritance typically went unsung. Writers could also be assigned to work on state guidebooks, a project intended to stimulate tourism in the long-term.

The Project, as it was then known, was principally conceived as a means of alleviating poverty. But its founding directors and many of its participating writers had idealistic aims about how their creative output could shape the national recovery. “It makes a big difference whether you see the world from inside or outside,” said Meridel Le Sueur, an FWP interviewer and writer stationed in the Midwest. “It affects how you see history, how you see time…how you see people.” The Project was founded on and sustained by the democratic notion that individual lives and stories matter, and that sharing them and making them known is as integral to American society as its bridges and its tunnels. The guidebooks and the oral histories, the Project leaders hoped, would demonstrate through the richness of their stories how the diversity of the nation was its strongest point.

According to EV contributor Kendra Hamilton, the Project flourished in the Commonwealth: “The Virginia Writers Project produced Virginia: A Guide to the Old Dominion (1940); collected approximately 1,350 ‘life histories’ between 1936 and 1941; published the Virginia Historical Inventory, comprising more than 19,000 survey reports, more than 6,000 photographs, and about 100 annotated city and county maps; and produced around 50 radio plays on historical and cultural topics that aired on radio stations around the state.”

Additionally, in 1936, the Virginia Writers Project formed an all-Black unit at Hampton Institute headed by Roscoe E. Lewis, an early proponent of the oral history method and a trailblazing advocate for including African American life in authoritative accounts of U.S. history. Over the course of a year, sixteen interviewers employed by the Virginia Negro Studies Project traveled the state collecting stories and recording musical performances from more than 300 formerly enslaved people in Virginia. Excerpts from the interviews (plus a staggering volume of archives-based corroborating research) appear throughout The Negro in Virginia, the book-length study, published in 1940, containing the project’s findings.

In “The Narrators,” an early chapter in the book detailing the methodology behind the oral history interviews, the writers put forth a few facts that reveal the urgency behind their project: “Of the 300 or more elderly Negroes interviewed in connection with this work…perhaps 250 had lived long enough as slaves to offer credible testimony about life during slavery…About two-score died within a year of the time they were interviewed. Soon the last person who has known what it meant to be a slave will have died.”

“There are questions about the slave system,” the passage continues, “that can be answered only by one who has experienced slavery… As these old people delved into the recesses of their memories and recreated the ‘back days,’ we began to get a picture of the plantation as seen from slave row—a picture that too often has been neglected in accounts of the period.”

As Hamilton notes in her EV entry, The Negro in Virginia was seminal at a time when firsthand accounts of slavery received little academic credence and Lost Cause narratives about slavery prevailed in dominant modes of historical scholarship. To read merely a sampling of the memories and tales recounted in The Negro in Virginia is to have one’s imaginative and historical perspectives immeasurably enriched. Yet the Virginia Negro Studies Project writers admitted the inherent limitations of their medium: “We cannot hope to do full justice to the ex-slaves we have interviewed. One must look into their eyes, hear their voices, watch their gestures, to appreciate them and their stories.”

Today, these words read like a call to action. What answers can only those of the older generations give us now? What questions do we ask them, and who will listen?

Workers employed by the Federal Writers’ Project encompassed all ages, nationalities, and levels of education. Still, though, the Project was majority white, with African Americans constituting a mere two-percent of the staff nationally. Another glaring omission in both the state guidebooks and the oral history collections is Native American voices and stories. Alsberg encouraged guidebook writers to list tribal events when possible and to avoid reproducing denigrating stereotypes, but overall, the Project assumed an outsider stance, describing Native American communities rather than allowing members to speak of their heritage themselves.

The FWP has inspired more recent oral history ventures such as the StoryCorps audio project, whose method of conducting interviews between family members and friends corrects the “outsider” problem faced by government-hired interviewers in the 1930s. In 2014 and 2016, StoryCorps collaborated with our History United program and the Danville Regional Foundation, recording innumerable stories from around the Dan River Region. You can listen to them on the History United blog or on its SoundCloud page.

Since the pandemic hit, Virginia Humanities has awarded $1,109,800 to more than 150 cultural organizations across Virginia, many of which are actively working to gather firsthand stories about how the virus has influenced community life statewide. Recent grantees working in the spirit of the FWP include Studio Pause in Arlington, which collaborated with the Gates of Ballston affordable housing community to produce a handmade book of personal reflections on the year 2020; the Public Housing Association of Residents in Charlottesville, which is embarking on an oral history project about grassroots organizing; and Stone Soup Productions, a Northern Virginia-based organization revisiting oral histories from the VWP.

Could a Writers’ Project—a federally funded, large-scale storytelling initiative—happen again? It’s hard to say. But capturing stories of everyday lives remains at the center of the work that Virginia Humanities and other states’ humanities councils do, day in and day out.