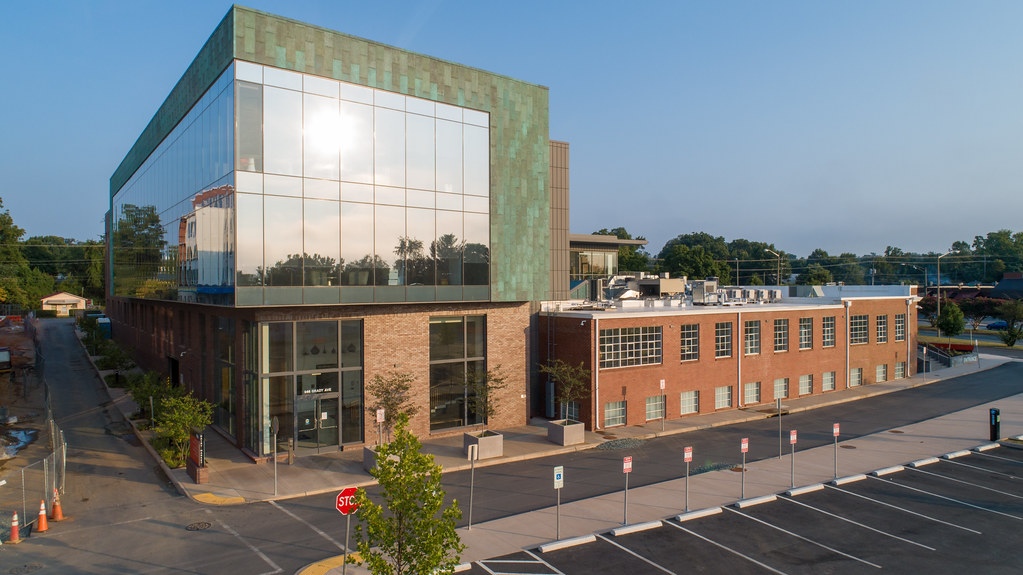 Stepping out from the elevator into the new Virginia Humanities Center, it is immediately clear that there is more to this place than just a sleek, new office. The new headquarters represents a bold step into the future for this forty-seven-year-old public institution. It is a future in which Virginia Humanities is a more accessible organization and one where the staff is able to collaborate in ways that were not possible before.

The large, open reception area has a front desk tucked in one corner, with a modern meeting room, known as the Mansbach Conference Room, behind it. Beyond the reception desk are two lounge areas. On the left, the Vaughan Reading Library with upholstered seating creates cozy conversational areas. On the right, the Lemon Lounge provides a place for public events, staff lunches, and impromptu meetings These spaces share a common wall of elegant, built-in storage featuring books and artifacts from throughout the organization’s history.

Moving Virginia Humanities away from its previous home at the colonially inspired Boars Head in western Albemarle County into a contemporary building close to the heart of Charlottesville has not just made the organization’s home more accessible to the community; it also has given the organization a boost of inspiration. “Despite a plethora of parking, we just weren’t accessible” says executive director Matthew Gibson of the former office. Staff was previously split into offices on various floors, with no gathering places other than conference rooms, making it harder for chance collaborations to happen in hallways. The new office, spread out over an entire floor of the Dairy Central building, contains offices for forty employees, the new Claude Moore Media Center, meeting areas of various sizes, break areas, and community and gallery spaces.

The new space has quietly come back to life in recent months as the staff of Virginia Humanities transitions from working at home over the last year to coming back together in their new office. The large open space that serves as the lobby, Vaughan Library, and Lemon Lounge branches off to three hallways or “streets.” The central corridor, which the staff refers to as “Main Street,” has meeting spaces and a few private offices with translucent walls and doors, allowing for a more modern collaborative feel. A modular hanging system in the hallway creates a rotating gallery where exhibits can be displayed. At the western end of central corridor is the Claude Moore Media Center, outfitted with new equipment to produce the With Good Reason radio show and podcast. To the south is the more functional support wing, containing a large kitchen ready to host events with built-in upholstered banquettes for seating, as well as restrooms and storage.

On the northernmost side is the main corridor of workspaces. A wall of large windows on one side provides abundant natural light to the row of open cubicles. Floating glass panels at the top of each cubicle act as partitions, while also retaining an open, airy, light-filled feel. The glass partitions were added late in the design process as a necessary precaution amidst rising concerns about the COVID-19 pandemic. Other changes were made with staff safety in mind, including changing the orientation of the desks from a back-to-back arrangement to one that creates more separation between workstations. Breaking up the rows of desks are built-in seating areas and “huddle rooms” for small meetings. Interior transoms help transfer light to the more interior streets set back from the main corridor. Throughout the space, tall open ceilings and a unified color scheme featuring warm wood tones, grays, and blues help the spaces to flow, while creating a backdrop for the work to be done here.

Located in Charlottesville’s 10th & Page neighborhood, a historically Black neighborhood that is home to Westhaven, a public housing community built for displaced residents of the Vinegar Hill neighborhood after the city razed it in 1964, the new Dairy Central building is part of a mixed-use development that features a food hall, retail spaces, offices and residential apartments. The architects kept the original Monticello Dairy building façade, and built a contemporary addition to the rear on the original footprint of the compound. As a public humanities organization, Virginia Humanities helps bridge the divide between communities, aspiring to share the stories of the lived experiences of all Virginians. The new location, accessible by public transit, centrally located to Charlottesville’s Downtown and the University of Virginia in addition to the 10th & Page neighborhood, is seen by many staff members as opening them up to deepening partnerships with local organizations and helping to reimagine their programs and what they can offer to a quickly gentrifying traditionally Black neighborhood. One recent example is the publication of a children’s book, A Promise to Grow, by local author Marc Boston and illustrated by Ariel Mendez, published in partnership with City of Promise. The story follows the adventures of a boy who dreams about his future and does good deeds in the neighborhood. It includes a history of Vinegar Hill crafted in a way that children can understand. Virginia Humanities’ staff hopes their new location and the partnerships they are building will inspire more projects like this.

And the ideas are certainly flowing. Justin Reid, director of Community Initiatives, who prefers to be behind the scenes in supporting good work in the community, sees more opportunities to partner with local residents. The organization’s internship program is one example of the inspiration the new location has brought—historically, the program was unpaid, limiting the opportunities to those who had the means for a volunteer internship. This led to a strong reliance on University of Virginia students. Now Virginia Humanities is committed to paying all its interns, opening up the program to those who previously couldn’t afford such an opportunity, including high school students from the surrounding neighborhood. Reid hopes to develop long-term relationships with these students, offering them year-round opportunities beginning with spending their summers as interns, continuing that relationship as they explore their post-secondary education, ending up with jobs with either Virginia Humanities or some of their sister organizations across the state. Ideally, Reid said he hopes to see these interns “dream up what programs they want to see while we play a supportive role” in making those dreams a reality.

The new location is also inspiring the organization to find new ways to learn and grow, reaching younger audiences and making resources available in new ways. Reid hopes the new location will offer more opportunities to partner with existing programs at Charlottesville’s Jefferson School African American Heritage Center, as well as City of Promise, while also taking up a role in the ongoing crisis of affordable housing and gentrification in Charlottesville. “We’re not a housing advocacy agency but a cultural organization concerned with human connection. We can enter the conversation on housing from a cultural standpoint, as cultural displacement and gentrification are often entwined,” he says.

One project already underway is a new story-telling initiative being developed in the Claude Moore studios that is helping the residents of the 10th & Page neighborhood tell their stories and preserve their history. The project was funded by a $100k grant from the Ford Foundation and a $30k grant from the Charles Fund. Other oral history project collaborations are also in the works, with the organization using its national platform to ensure voices that haven’t been amplified in the past are being heard.

The excitement for the new space and the energy it has brought the organization is palpable and infectious among the staff. Sarah McConnell, executive producer of With Good Reason, bubbles with enthusiasm for the new space, describing it as “both beautiful and spacious inside and out with room to breathe.” This sentiment was repeated in conversations with staff as they settled into the new environment—that the location, having been intentionally designed to be a community gathering space, was a very much welcome change from their last venue. Reid points out the public aspect is critical to the very mission of Virginia Humanities—being accessible is key to the idea exchange necessary behind the work they do.

In finding its new home, Virginia Humanities didn’t just get a new office space that was more accessible to the community—it also found new inspiration to better fulfill its mission of being a truly public humanities organization.

This piece originally appeared in the 2021 edition of our Views magazine which was published in November 2021.