A Look Back at David Bearinger's Time at Virginia Humanities 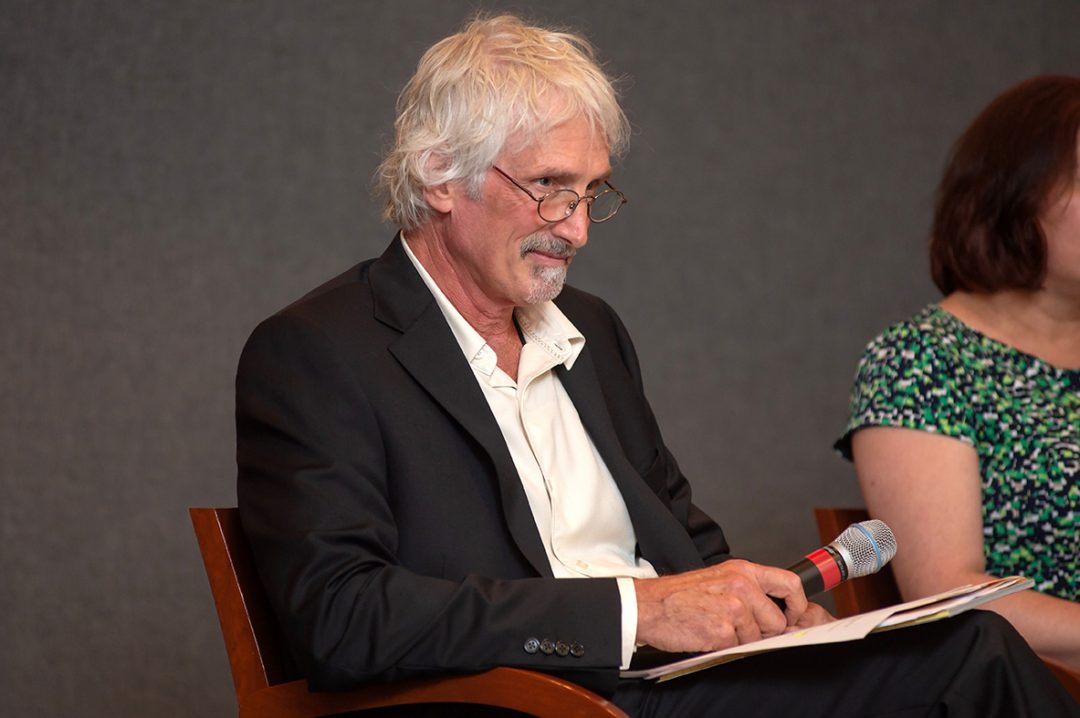 It was July 1984. Robert Vaughan, executive director of the Virginia Foundation for the Humanities and Public Policy (as Virginia Humanities was known until 2018), sought a temporary replacement for an employee on leave. Vaughan offered the position to a young man who recently had moved to the Charlottesville area after five years as a book editor in New York. David Bearinger accepted Vaughan’s offer of a twelve-month-long stint with Virginia’s budding humanities council and began immersing himself in the Commonwealth’s history and culture. As David fell in love with Virginia’s stories, the Virginians with whom he came into contact fell in love with David, and the original twelve-month gig was extended twice. In 1989, Vaughan appointed David as director of the Grants Program. The rest, as they say, is history—a rich and productive history. It would take many pages to document all of David’s accomplishments over his nearly four decades with Virginia Humanities. It’s a long list, but among the highlights:

David secured National Endowment for the Humanities (NEH) funds to organize what became a fifteen-year project called “The Bill of Rights, the Courts and The Law,” which produced over 160 public programs attended by 21,000 people, a book, and a teachers’ institute. Another NEH grant he secured supported a major exhibition, book, and symposium on the history of the Indian Education Program at Hampton Institute (now Hampton University).

David inaugurated Virginia Humanities’ dedicated work with Virginia’s Native communities, beginning with a modest grant to support a conference of the initial group of eight state-recognized tribes. The relationships that he developed with tribal leaders led to the establishment of a new Virginia Indian Heritage Program (later Virginia Indian Programs) at Virginia Humanities and the hiring of a director of Virginia Indian Programs (the late Karenne Wood). Chief Anne Richardson of the Rappahannock Tribe said, “David’s support of Virginia’s tribal community began with a relationship that brought funding for projects and the first steps toward restoring tribal histories and their sovereignty.”

David also secured funding for the History United project, which explored the divided history of the Danville region, and “Beneath the Surface,” which investigated the history of race in the communities of South Hampton Roads. As he traveled the Commonwealth, David developed an enduring interest in the stories of Virginians whose roots were in regions that were often overlooked. He was instrumental in starting regional humanities councils in Southwest Virginia, the western Tidewater region, and the Eastern Shore, uncovering stories and traditions that continue to be shared and celebrated and building partnerships that remain strong. “I wanted to raise awareness of the Filipino-American community in Virginia but couldn’t generate any interest. Until I met David,” said April Manalang, an associate professor at Norfolk State University who has collaborated with Virginia Humanities on over a dozen projects related to the large Filipino-American community in the Hampton Roads area. “He was willing to work with a community that was previously unseen. He lifted out the richness of the story that was there but not illuminated,” she said.

David has arguably traveled more miles on Virginia’s roads over the past thirty-eight years than anyone not running for elected office.

David loved uncovering and sharing these rich and diverse stories that had not been a part of the official narrative. For while that narrative is impressive on its own, it becomes more beautiful and truthful when the voices of the previously unheard are included: of the oppressed, the overlooked, and the marginalized. David connected with the emotional power of these voices, a power that often derived from heartbreak but had endured through strength and resilience. As diverse as these voices are, they shared a message: “We are here.”

Emma Violand-Sanchez, a former Virginia Humanities board member, recalls when she asked during a board meeting: “Why are there no programs about Virginia’s immigrants and refugees?” “David listened to me,” she said. In 2015 and 2016, David coordinated a NEH-funded program, “The Changing Faces of Virginia,” that explored the impact of immigration and migration in six Virginia communities—Arlington, Harrisonburg, Roanoke, Richmond, Norfolk, and the Eastern Shore.

His interest kindled, David worked with Virginia Humanities’ Folklife Program and then-director Jon Lohman to feature Bolivian and Filipino representation in the 2015 and 2016 Richmond Folklife Festivals. In 2017 and 2018, David secured funding from American Evolution, Virginia’s 1619–2019 commemoration commission, for a collaboration with the Library of Virginia called “Immigration Stories.” For almost a year, David traveled the Commonwealth doing what he does best—building personal relationships and engaging with communities. Then, with his Virginia Humanities colleague and videographer Pat Jarrett, he conducted video-recorded interviews with thirty-four “new Virginians”—immigrants and refugees from twenty-nine countries spanning the globe. These interviews, which often dealt with emotional and traumatic themes, became the foundation for the Library of Virginia’s “New Virginians” exhibit and are a testament to David’s remarkable ability to form human connections.

“He valued personal stories about our complicated journey to Virginia, our culture, traditions, and contributions to the United States,” said Violand-Sanchez, who was one of the interviewees. Another interviewee, Seyoum Berhe, state refugee coordinator at Virginia’s Department of Social Services, said, “David has a gift for a deeper listening that allows him to listen not only with his ears but through his heart and mind to a point that he becomes one and the same with those he listens to.”

As important and pathbreaking as these prominent projects were, in my opinion, David left his strongest mark through his work overseeing Virginia Humanities’ grants program. The grants program is the heart and soul of Virginia Humanities’ work; it is the most direct way of supporting the humanities in every corner of the Commonwealth. During David’s tenure, Virginia Humanities’ awarded more than 3,500 grants to community organizations across Virginia. As a former chair of the Grants Committee, I witnessed firsthand how David was guided by his inherent curiosity, his ability to listen with equanimity, his openness to all people, and yes, his humanity.

If we received a grant proposal that was not quite up to snuff, David worked with the applicant to improve it. He was conscious that our grants are made with public funds and wanted to ensure that these funds were spent responsibly; but he also could detect the spark of creativity and promise in many proposals that just needed a bit of polishing to sparkle. He had a sharp eye for stories that needed to be told. “I have seen firsthand the visionary belief David has in the power of story to open hearts and to transform communities,” says Jamie Ross, a documentary filmmaker who has collaborated with Virginia Humanities for over 20 years.

David has a gift for a deeper listening that allows him to listen not only with his ears but through his heart and mind to a point that he becomes one and the same with those he listens to.

And often, the smallest of grants would be a seed that blossomed into a much larger project. “I have been so impressed by the humanities powerhouse Virginia Humanities has become and the way it continues to support and nurture these local community projects. That is all David,” says Ross.

Consider the last three grant cycles David oversaw before his retirement in July: 155 grants awarded, 69 of these to first time grantees; 74 focused primarily on African-American history and culture; 15 focused on Virginia Indian history and culture; 17 focused on the immigrant and refugee experience; and 16 on other facets of the Virginia story, from the voices of the incarcerated to the experience of living with deafness to the history of transgender activism in the Commonwealth.

After working closely with him for six years, I believe I have finally cracked the code that made David so effective in his work and beloved by the communities he served. It’s quite simple: David never forgot that while he worked for Virginia Humanities, he served the citizens of the Commonwealth. Virginia Humanities’ single largest source of funds is the General Assembly’s annual budget allocation; as such, its employees are public servants. David took that responsibility seriously. Of course, he supported the institution and its impressive growth over the years. Even as he prepared to retire, he laid the groundwork for a renewed institutional focus on Virginia Indians.

But David has arguably traveled more miles on Virginia’s roads over the past thirty-eight years than anyone not running for elected office. It would be hard to find any corner of the Commonwealth where someone doesn’t know David. And David is extremely unselfish with his relationships; he is constantly bringing people together, forging connections, looking for commonalities. The “David Bearinger Network” is both broad and deep. “David has a rare gift for bringing disparately minded folks together, unifying hearts, and inspiring everyone towards a greater goal. If David ruled the world, there really would be peace on earth,” says current Virginia Humanities Board Member Kellee Blake.

David’s retirement is the end of an era. But his legacy will continue in the hundreds of relationships he nurtured and the thousands of people touched by his work. Just as I have no doubt that Virginia Humanities will continue to thrive, David also will thrive as he begins Act III of what has already been an immensely rewarding life.